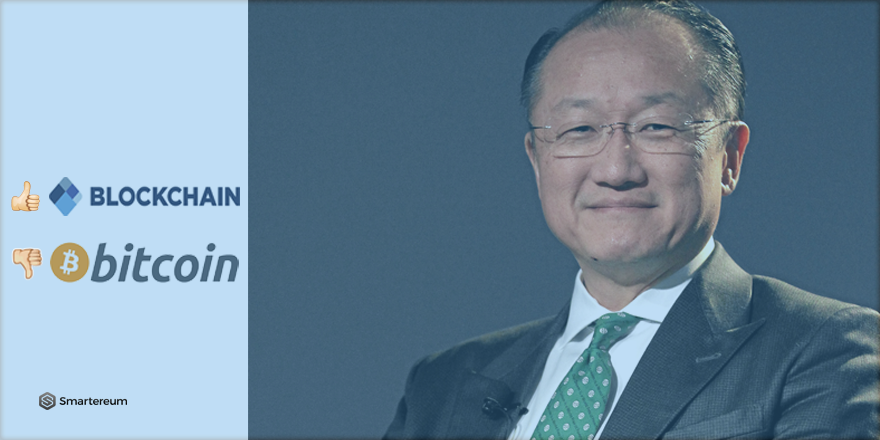 The president of the World Bank, Jim Yong Kim, had very positive words for Blockchain technology, when he made a media appearance yesterday.

Speaking during an interview with CNBC, he was very optimistic about Blockchain technology, stating that the technology is “something everyone is totally excited about.”

He however added a note of warning on the risks of investing in the offshoots of Blockchain technology – cryptocurrencies.

He further said that the only time Blockchain technology was adopted for use in cryptocurrency was only in Bitcoin, and other attempts at that were just a cunningly devised method to exploit and even scam people of their money.

When quizzed on the potential and viability of Blockchain technology, he remarked:

[perfectpullquote align=”full” cite=”” link=”” color=”” class=”” size=””]”Blockchain technology is something that everyone is excited about, but we have to remember that Bitcoin is one of the very few instances [when Blockchain technology was used in currency]. And the other times when Blockchain was used, they were basically Ponzi schemes, so it’s very important that if we go forward with it, we’re sure that it’s not going to be used to exploit.”[/perfectpullquote]

The World Bank was established as a go-to lending agency (so to speak), providing funds for the governments of the nations of the world.

A laudable effort is the recent launch of a blockchain development laboratory in the past summer, on the grounds of transparency and efficiency.

As the interview went on, Kim clarified his misgivings about Bitcoin.

Comparing it to payment processing platforms like Alibaba’s, he outlined parameters such as speed, transparency and efficiency – once again.