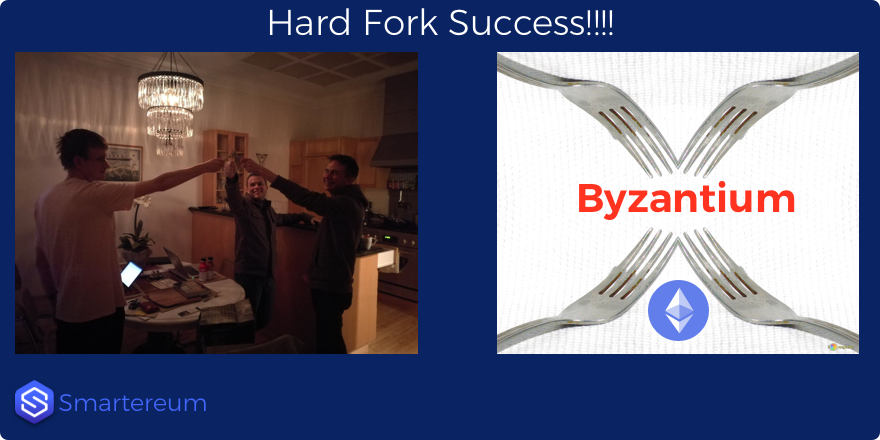 Ethereum successfully executed its much-anticipated software update, Byzantium,  on October 16, 2017; 05.22 UTC. The software was updated at the target block 4,370,000.

This hard fork is the 5th on the network and comes after the ERC-20 token standardization. In line with the Ethereum roadmap, Byzantium is the first phase of the “Metropolis” upgrade. The next would be “Constantinople”.

There were a few major changes to the software; basically a couple of Ethereum Improvement Proposals (EIPs) for the platform. Notable changes include an increased delay of the mining difficulty bomb “ice age” by a year, an addition of fully anonymous zero knowledge proofs (ZK-Snarks) and a reduction in mining reward. The new software also provides support for big integer modular exponentiation, variable length return values, changes to the difficulty adjustment formula taking uncles into account and addition of a ‘REVERT’ opcode.

Few days leading up to the hard fork, developers had to address some critical bugs noticed on the software. Software client, Parity issued a correction to a “consensus bug”, an error that could have caused the network to split during the hard fork. Geth also published a hotfix for a DoS bug.

The price of the Ether, ethereum’s token, increased to $348 following the new upgrade after minor fluctuations within the $300 mark for most of the week. The increase could be unrelated to the hard fork.

So far there are no known problems with the updated software.