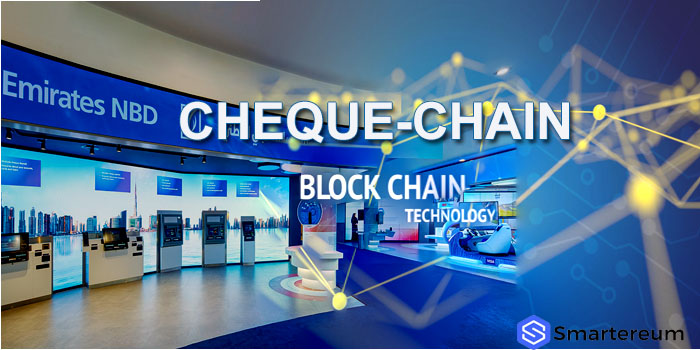 The National Bank of Dubai (NBD), one of the biggest banks in the Middle East by asset volumes has successfully implemented “Cheque-chain” a blockchain powered technology to checkmate financial frauds by providing high-level authentication to issue checks, as well as to enhance the security standards across the banking sector.

This development was first reported by Arabian Business News on Saturday, April 21. The bank revealed that it was now unveiling the “security-enhancing technology” for the sake of its customers all over the country.

The system operates by enabling a unique QR (Quick Response) code which is printed on newly issued chequebooks and uploading the information on the bank’s blockchain network. This would ensure that once the cheque has been received and cleared by the bank’s operatives using the ICCS technology, the cheque can then be validated and its authenticity is confirmed the bank can have access to its source at all times. NBD believes that this system would reduce the risk of cheque forgery significantly.

While speaking to newsmen, Abdulla Qassem the group chief operating officer of NBD disclosed that the institution is looking at commercializing the innovative technology after the test phase was successfully conducted. He also revealed that around one million checks have already been inserted on the blockchain system during the test phase.

Abdulla stated that the company is pleased to roll out Cheque Chain to our customers nationwide, becoming the first bank in the region to offer such service. He explained that “[the] initiative will significantly strengthen [the bank’s] risk and security management processes, particularly through the reduction of cheque fraud.”

This new development is understood to be in line with the United Arab Emirates “UAE Blockchain Strategy 2021” which would see the country becoming a global front-runner in the use of innovative technologies like blockchain. Sheikh Mohammad disclosed that before 2020, half of all government transaction would be conducted through blockchain technology.