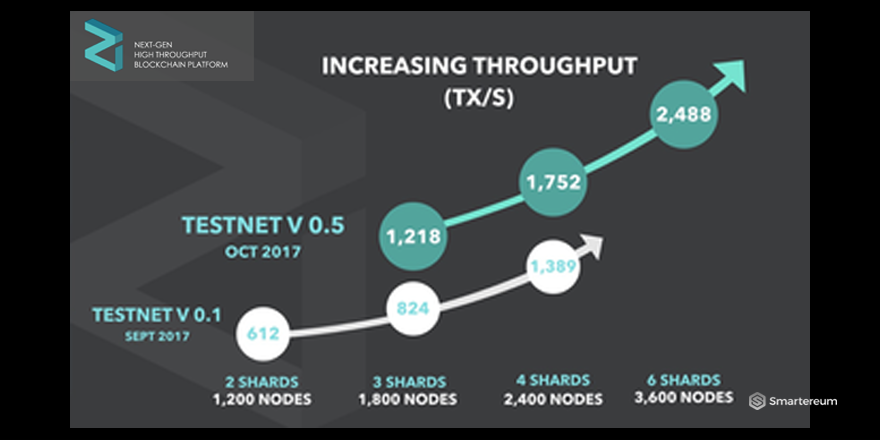 Zilliqa, a Blockchain platform developed by researchers at the National University of Singapore, has recently reached a scalability milestone in transactions per second (TX/s).

The invention of blockchain technology is – either potentially or currently – one of the major highlights of the age which boasts a lot of innovative solutions in technology, which have – quite unsurprisingly – taken the world by storm.

However, a major obstacle of  Distributed Ledger Technology (DLT) is the inability to handle a large number of transactions per second (in fact, Bitcoin and Ethereum process transactions at between 7-10 TX/s).

Zilliqa has recently reached a peak transaction rate of 2488 TX/s on its internet testnet platform, based on a technological concept known as “sharding.”

The basic idea behind sharding is to automatically partition block verification to a large network of machines processing transactions by running parallel sub-committees, or “shards”. Each single shard processes its own microblock in parallel with other shards, with the resulting microblocks merged into one final block.

A huge challenge with sharding is ensuring a highly-secure and unbiased sharding process.

Zilliqa overcame this by developing a mechanism that dynamically elects and updates a select group of machines.

Dr. Xinshu Dong, CEO of Zilliqa, says: “This is an important milestone in the development of Zilliqa because it shows that our sharding protocol technology is scaling almost linearly with the number of nodes in the system. We are now one step closer to releasing our source code and establishing a public test that will allow developers to begin to test the incredible potential of this technology.”

To achieve this remarkable feat, the team used all of the available Amazon Web Services EC2 instances in Singapore within the category they required.

In total, they used 3,600 Amazon EC2 instances that acted as single nodes to test their blockchain infrastructure.

Last month’s testing round reached about 1400 TX/s (using 2800), and judging by these results, it’s safe to assume they’re on the right track – they’ve gotten better in such short time!

Research estimates that, if Zilliqa ran on the same number of nodes as Ethereum (about 22,000 nodes), it would be fully capable of processing 15,000 TX/s, making it almost double the average of VISA, the largest global electronic payment platform.

In December 2017, the Zilliqa team will open a public testnet – along with a release of its source code. This will enable the general public and the developers alike to test the system’s functionality, performance and robustness, and also start developing the next batch of Decentralized Applications (dApps) which can be integrated into the platform.