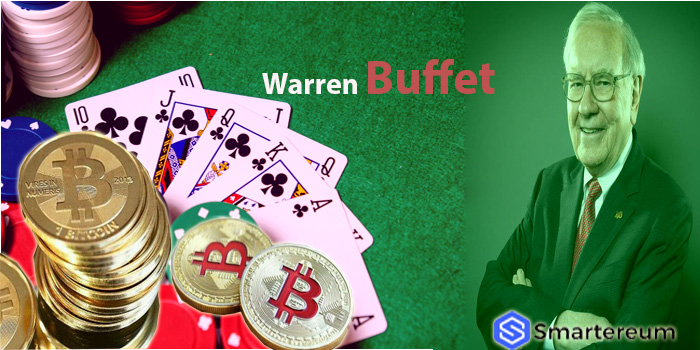 American business magnate, Warren Buffet has once again stated his reservation towards bitcoin and cryptocurrencies in general. In an interview during Berkshire Hathaway’s annual shareholder meeting, buffet said bitcoin purchase did not amount to an investment rather a gamble.

The iconic investor told Yahoo finance that bitcoin fell into a category of items which when bought did not satisfy the criteria of an investment. He said, “There’s two kinds of items that people buy and think they’re investing,” he said. “One really is investing and the other isn’t.” Bitcoin, he says, isn’t.

Warren, the CEO of Berkshire Hathaway and third world richest man, explained the concept of investment and tried to show how bitcoin was off. “If you buy something like a farm, an apartment house, or an interest in a business […] it’s a perfectly satisfactory investment, […] You look at the investment itself to deliver the return to you. Now, if you buy something like bitcoin or some cryptocurrency, you don’t really have anything that has produced anything. You’re just hoping the next guy pays more.”

Buying bitcoin he noted is purely speculative and as such, it is a gamble and not an investment. “If you want to gamble, someone else might come along and pay more tomorrow. But this is gambling, not investing,” he continued.

Like many corporate investors, Warren Buffet has not been a huge fan of cryptocurrencies, so his statement doesn’t come expected. However as more mainstream investors get drawn to cryptos especially with the introduction bitcoin futures contracts, Warren has remained steadfast in his stance on cryptocurrencies. He remains neutral when it comes to bitcoin futures as he admitted he didn’t know much about it.

Contrary to Warren’s views, most financial regulators see cryptocurrency transaction as an investment and seek to task gains from such dealings as such. The chairman of US Securities and Exchange Commission (SEC) recently classified cryptocurrency tokens in ICOs as securities but not bitcoin. However, in a hearing at the US House Committee, with SEC division… bitcoin was referred to as an investment.