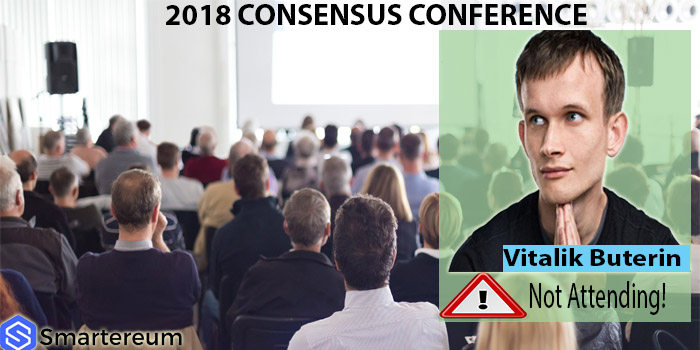 Ethereum co-founder, Vitalik Buterin has declared that he will not attend this year’s Consensus Conference and has urged others to boycott the event. In a four-point twitter tirade, Buterin criticized Coindesk, the organizers of the event.

Firstly, Buterin accused Coindesk of encouraging pump and dump scams by attacking links to these fraudulent sites in its articles. He cited an article on OMG which had a link that directs to a giveaway scan site.

I am boycotting @coindesk's Consensus 2018 conference this year, and strongly encourage others to do the same. Here is my reasoning why.

1. Coindesk is recklessly complicit in enabling giveaway scams. See their latest article on OMG, which *directly links* to a giveaway scam. pic.twitter.com/WDr9uZ8XOw

Secondly, the ethereum cofounder faulted Coindesk’s reporting of the new Ethereum Improvement Proposal EIP-999 which sought to release frozen ETH on parity wallets. Buterin feels that the author gave a wrong impression that the vote would split the ethereum ecosystem.

Buterin reserved his last criticism for their reporting policies before he turned on the price for the event tickets which he suggested was taken overboard.

Coindesk’s editor-in-chief Pete Rizzo (@pete_rizzo_) was quick to respond to the allegations noting that his team was working to resolve the issue with the OMG article while he saying it was a one-off error and not ‘recklessly complicit’. He also said Buterin, who had earlier promised to take more risks on social media, was playing a ‘bully pulpit’ move. He, however, said in one of the following tweets he didn’t want to be enemies with the ethereum cofounder.

I'm sorry, @VitalikButerin this is an absolutely ridiculous claim.

Other than this one issue, which we're working quickly to resolve, how is the editorial team "recklessly complicit" in enabling giveaway scams? What is one other instance where this has happened? https://t.co/hpDiwybpBm

The incident caused some furor on social media with members the crypto community offering support, further criticisms or some simply adding perspective. How all these affect the Consensus 2018 conference, which usually holds in May in New York is yet to be known.

Here’s a list of Buterin’s tweets in chronological order;