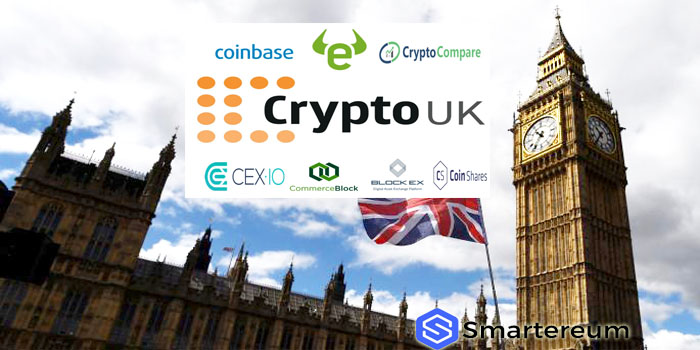 A UK based self-regulatory trade association for the United Kingdom’s cryptocurrency sector CryptoUK has advocated for favorable regulations in the industry. The association made this remark in an address to several Members of the Parliament (MP) on Tuesday, May 1st.

The self-regulatory association proffered some recommendations in a written proposal it sent to the Treasury Select Committee’s inquiry which was set-up to look into the impact of cryptocurrencies on the British economy, including risks connected to their usage by consumers, businesses, and the government.

CryptoUK is made up of seven of the world’s largest cryptocurrency companies, trading platforms, and services such as Coinbase, eToro, CryptoCompare, CEX.IO, BlockEx, CoinShares, and CommerceBlock. It was formed in February this year with the primary goal establishing self-regulation within the UK crypto industry.

Also included in the recommendation, CryptoUK stated that the British authorities should focus more on brokers and trading platforms instead of the cryptocurrencies themselves. Recall that in March 2018, Philip Hammond, the U.K Chancellor of the Exchequer, announced that the United Kingdom Government is about to set-up a Crypto Assets Task Force which will include the Bank of England and the Financial Conduct Authority. The task force will help the UK to manage the risks around Crypto assets, as well as harnessing the potential benefits of the underlying technology.

The cryptocurrency association is also of the opinion that that HM Treasury should provide the Financial Conduct Authority (FCA) with new permissions to control cryptocurrency investment in the country. Furthermore, it proposes that the Financial Conduct Authority should hold the responsibility of licensing approved exchanges and proffering and enforcing new operating laws guiding money laundering activities, monitoring investors and exchanges operational standards.

In accordance with the recommendations submitted on the proposal, Iqbal Gandham, the chairman of CryptoUK and also the managing director of eToro, disclosed that: “Introducing a requirement for the FCA to regulate the ‘on-off’ ramps between crypto and fiat currencies is well within the remit of HM Treasury. Based on our analysis, this could be achieved relatively easily, without the need for primary legislation, and would have a huge impact, both in reducing consumer risk and improving industry standards.”

Prior to this proposal by CryptoUK, the United Kingdom’s Financial Conduct Authority has on its own released a business plan which contains a strategy to develop a cryptocurrency policy later this year. In the business plan, the FCA highlighted that reviewing of cryptocurrencies is part of its priority work for the new fiscal year. It also acknowledged that cryptocurrencies are increasingly attracting the interest of the markets and regulators alike.