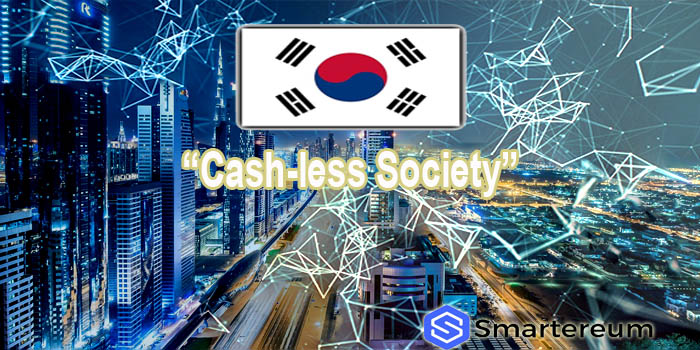 In accordance with its “cashless society” scheme, the South Korean apex bank, the Bank of Korea (BOK), may seek to utilize cryptocurrencies and blockchain applications in its efforts.

The bank announced the launch of the cashless society goal in its “2017 Payment Report” which was published on the on Tuesday, May 1. In the report, the bank made known that is has started exploring the use of the innovative distributed ledger technology in the area of using blockchain and passwords to better secure payment processes.

In line with this cashless scheme, the BOK set-up an organization for researching cryptocurrency and analysis the potential benefits or risks of involving this technology in the overall Korean financial system. The report also indicates that the bank has been collaborating with other foreign-based apex banks to conduct research on the “Cashless Society” scheme.

An analyst at the Shinhan Investment Corp said concerning the development that, “The government also plans to use the initiative as a means by which to open the underground economy, which is mostly cash-driven.” Shinhan disclosed that the major goals of the project are to enhance customer convenience and reducing the cost of producing physical currency. In 2016 alone, South Korea reportedly spent KRW 53.7 bln ($47 mln) on printing and issuing physical currency.

Also concerning the case of regulating ICO’s which has been a cause of worry to investors looking to operate in South Korea, the report denoted that since other major countries usually apply their existing securities laws, South Korea may follow suit however, it also noted countries like US, Switzerland, and China will [in due time] be accepting and enacting regulations relating money laundering through observation of foreign cases.

Additionally, the report also discussed in details other financial crimes like cryptographic monetary taxation, and cooperation in the country related to cryptographic money, most especially the joint declaration adopted at the G20 finance ministers and central bank governors’ meeting in March.

As reported by KoreaTimes, the South Korean Government is looking at phasing out physical cash to become a complete “cash-less society” by the year 2020. In that regard, the BOK began a trial whereby customers could deposit small change from transactions and put them on a prepaid or mobile card to use at convenience stores, discount stores, and department stores.