On Monday, Verge suffered a second cyber attack in the space of two months bringing to for the bitter taste of cryptocurrency heists. The first hack happened in April and 250,000 XVG coins were stolen. This latest breach was more hurtful; about 35 million XVGs worth approximately $1.7 million was stolen.

This narrative has increased as cryptocurrencies became more popular since 2017. The rapid increase in bitcoin prices coupled with the proliferation of Initial Coin Offerings (ICOs) in 2017 brought much attention to cryptocurrency.  Dave Jevans, the chairman of Anti-Phishing Working Group (APWG) revealed that $1.2 billion was stolen by cryptocurrency cybercriminals since 2017. This infographics provided by HowMuch.net gives a birds-eye view of the major cryptocurrency hacks since 2011. 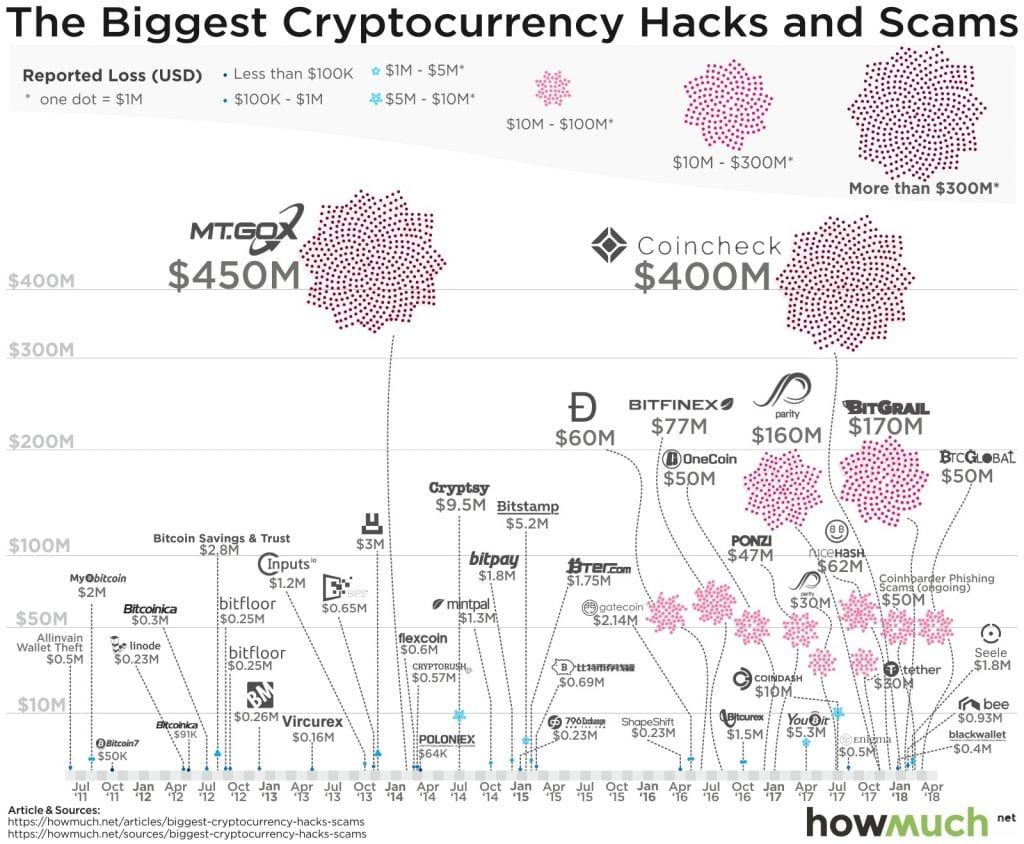 NOTE: The values used in the infographics were calculated based on the worth of the coins at the time the theft happened.

Jevans, who is the CEO of cryptocurrency security startup CipherTrace, noted that the trend in cryptocurrency cybercrime has moved towards actual cyber heists. According to him, “one problem that we’re seeing in addition to the criminal activity like drug trafficking and money laundering using cryptocurrencies is the theft of these tokens by bad guys.”

The Anti-Phishing Report for Q4, 2017 identified major targets for cryptocurrency hacks as SaaS/webmail providers, financial/banking sites, and file sharing platforms. Cryptocurrency exchanges which have lost the most to these cybercriminals are Mt. Gox, Coincheck and Bitgrail.

The Mt. Gox hack remains the biggest cryptocurrency hack in history. In the incident that occurred in 2014, 850,000 bitcoins were stolen. The worth of the stolen coins at the time of the theft is about $450 million USD, but it would amount to about $7 billion USD at today’s rates. The exchange filed for bankruptcy after the hack.

Coincheck hack occurred toward the end of January this year and has been heralded as the biggest in recent times. The Japan-based exchange lost about $530 million USD worth of NEM (XEM) tokens. Since the attack which was traced to phishing emails sent to staff computers, a lot has happened within the exchange and the Japanese crypto community. Japan has strengthened its cryptocurrency regulations while Coincheck was acquired by Monex group.

Bitgrail hack, another incident that happened in 2018, became the third biggest. The hack, shrouded in controversy and skepticism, cost the exchange about $195 million. About $19 million Nano tokens were stolen from the Italian cryptocurrency exchange.