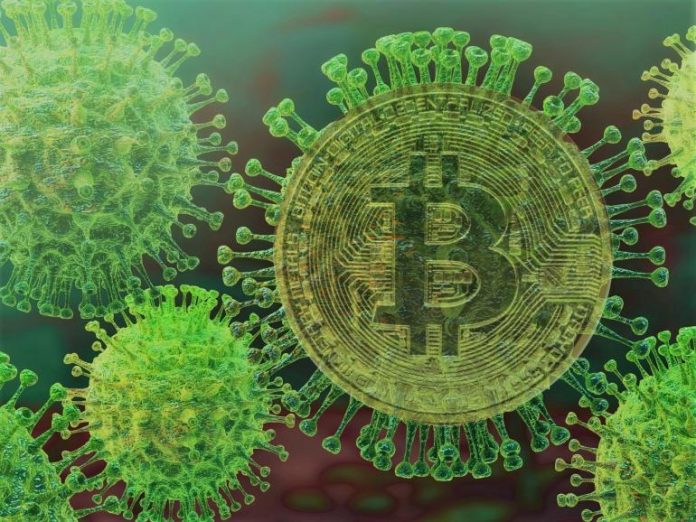 The coronavirus is bringing destruction to financial markets and putting tremendous strain on the economy, as the world has essentially stopped in its place, both in fear and in requirement, as it’s the only way to stop the rapid spread of the outbreak.

With transportation, production, manufacturing, and even entertainment impossible, the economy is spiraling out of control, and markets are reflecting a civilization in complete panic.

The pandemic caused the stock markets to experience the worst weekly selloff since 1987, crushing the numbers from 2008 during the Great Recession. Records have been broken on nearly all timeframes across all markets, and the initial impact of the coronavirus is only just starting to be felt across the globe.

Assets that are normally safe havens, like precious metals, gold, silver, and others, all tumbled alongside stocks wiping out more than two years of gain and trillions of dollars from the market.

Markets are having a liquidity crisis, as investors cash out everything they can and then some, fearing a possible recession, coming inflation, further collapse of the stock market, and a possible end of the world as we know it due to an out of control virus.

Recession is already here, with unemployment rates already skyrocketing as a result of the impact of the pandemic.

The economy is crumbling under decades of greed. Policymakers are losing control. The government is overspending on bailing out companies that fattened executive wallets rather than stockpiling cash that could have saved employees from layoffs during times like we are currently facing.

Inflation is a given at this point, and the dollar is facing its darkest hour as the global reserve currency. Amidst the darkness, could shine Bitcoin, the first-ever decentralized cryptocurrency, born during the last major financial crisis.

Why Bitcoin Is The Answer To Recession

Bitcoin may have also recently experienced a record-breaking drop in value alongside stocks in March 2020, showing the largest ever correlation with the stock market since the asset was first conceived, it has otherwise been mostly uncorrelated, and is an asset unlike stocks or traditional equities.

Bitcoin has attributes that make it far more similar to a commodity than a stock, and shares many similarities with precious metals, earning it the nickname “digital gold.”

It earned the title due to the asset’s hard-coded scarcity. Only 21 million Bitcoin can and will ever exist, and with the way the complex cryptocurrency is designed, even more of them are locked away and lost forever.

The delicate balance of demand and the incredibly limited supply of the asset is thrown off around each and every halving, an event where the reward miners that operate the underlying blockchain network receive for doing their jobs and maintaining the protocol, is cut in half.

This design choice gives Bitcoin a deflationary aspect that is complete opposite that of fiat currencies. And in a world where the potential collapse of the dollar and other fiat currencies could be near due to the coming inflation, Bitcoin could be the best answer to all of the problems these archaic currencies have caused over the years.

It’s a dark thought, but in a world where the government could seize individual assets to pay off its debts and avoid default, banks are shut down due to coronavirus, or cash continues to be a carrier of the highly contagious virus, Bitcoin could be the best chance society has for a working currency that can be accessed without contact, and out of the reach of greedy government officials.

Buy Bitcoin As a Hedge Against Inflation

It sounds simple, but it all starts with buying Bitcoin.

What you do next with the Bitcoin is up to you. However, it’s recommended that either you keep the Bitcoin in cold storage, locked away outside of the reach of the government or any other third-party on the blockchain, or move it to a trading platform to take advantage of the cryptocurrency’s infamous volatility.

This volatility is what put Bitcoin on the map. It’s made investors rich over the years, however, it’s regularly considered a trader’s asset due to the massive price fluctuations.

It’s difficult to imagine such a highly volatile asset as a store of wealth, however, as Bitcoin matures, its price will eventually stabilize. For now, the volatility is a result of the asset’s value being driven by speculation of what it will ultimately become.

Because it has such potential, it could eventually be worth prices of $100,000 to as much as one million USD, but it could just as easily be worth zero if the experiment fails or the network suffers a complete failure.

It has the potential to completely unseat the dollar as a replacement for the global reserve currency, and due to its deflationary design could act as a safe haven asset during an economic crisis and its value rise during extreme inflation.

This potential alone could drive Bitcoin’s value during this time of economic uncertainty.

In the meantime, the best way to profit from Bitcoin isn’t to hold it, it’s to trade it.

Trading Bitcoin is the best way to profit from the asset while waiting to see if it lives up to its incredible potential as a disruptive financial asset. And by trading the asset, you’re never fully exposed to the risk if the asset fails to replace fiat.

The speculative nature of the market is notorious to investors for its volatility but a dream for traders seeking massive profits. And with markets in chaos, the cryptocurrency market is also more volatile than ever with more opportunities for profit than ever before.

Finding a Bitcoin-based margin trading platform, such as PrimeXBT, can help traders stay profitable during the market downturn, stay exposed to Bitcoin as a base asset, and generate returns from forex, commodities, stock indexes, and more in addition to Bitcoin, Ethereum, Litecoin, Ripple, and EOS.

By staying exposed to Bitcoin as the base asset, any and all trades on the platform are settled in Bitcoin, growing your Bitcoin holdings even further in anticipation of its value climbing in the face of coming crisis and inflation.

If the asset is to someday truly shine and become the main currency of the world, it’s value could skyrocket, so it’s best to accumulate as much as possible while prices are low and the economy is still hanging by a thread.