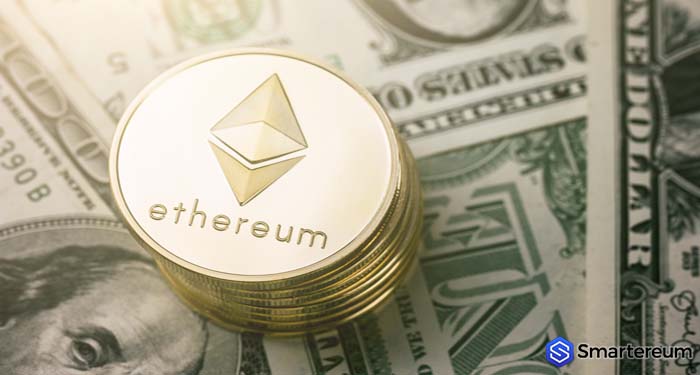 Ethereum News Today – Ethereum has one new improvement to its network. This time it is about Ethers NVT. The Blockchain analytics firm, Santiment recently shared data suggesting that Ethereum’s NVT remains bullish. A Blockchain’s NVT is its network value to transaction ratio. This data is regarded as a price-to-earnings ratio. Additionally, data are showing that investors have been accumulating ETH in massive amounts.

Ether has reportedly undergone a strong price drop from its weekly highs of around $385. The number two digital asset by market cap fell under the $370 mark this Tuesday (October 20) as capital flooded from the rest of the altcoin market back to Bitcoin. Bitcoin on its own has reportedly underperformed altcoins in the last six months.

One reason why experts are still bullish on ETH despite price drop is that Ether’s on-chain trends are bullish as well. Santiment recently shared a chart to show why they are bullish. According to the chart ETH’s price action relative to the NVT to transactions metric can be seen. Going by the current outlook of the ratio, Santiment noted that Ether is still bullish.

However, the price trend is moving in neutral territory. Charts of ETH’s price movement display the coin’s action in the past few years with an overlay of ETH’s NVT model. The report on Ethereum by Santiment comes shortly after the firm reported that there’s been a spirit of accumulation amongst Ethereum’s holders and top investors. Santiment recently noted that the total number of ETH held on digital asset exchanges has dropped dramatically in the last two months.

The total amount of ETH tokens on cryptocurrency exchanges has dropped. The analytics firm said the drop occurred as a result of accumulation. The chart shared by Santiment (indicating ETH’s price action in the last few months with an analysis of the number of top ten exchange holdings against non-exchange holdings) proved this.

Charts from Santiment shows that not all investors and digital asset analysts in the cryptocurrency space are convinced about altcoins like Ethereum. Especially in the current stage of Bitcoin’s market cycle. Recently, Kyle Davies, the co-founder of Three Arrows Capital (a digital currency fund manager), suggested that BTC will likely continue to outpace altcoins dramatically. This report came after Su Zhu, Davies’ business partner stated something similar. Zhu suggested that it is the right time for Bitcoin to rally as altcoins drop further.