Scammers are cashing in on Telegram’s upcoming ICO. Desperate for an opportunity to jump aboard in the next big thing, cryptocurrency owners are losing money by investing blindly in fake Telegram ICO websites.

Telegram’s upcoming ICO promises to break records with a target raise of $1.2 billion

Chat app Telegram’s upcoming ICO promises to break records with a target raise of $1.2 billion, which may be extended to $2 billion according to new reports. The public sale component isn’t scheduled to launch until March, as noted by multiple media including TechCrunch, but that hasn’t stopped unscrupulous individuals seizing the opportunity.

Expectation was palpable. “Telegram is already the de facto communication channel for the global cryptocurrency community, making a natural home to its own coin and Blockchain,” TechCrunch’s Josh Constine and Mike Butcher wrote. At the same time, English and Russian versions of its whitepaper and investor prospectuses, including precise information around the ICO, were widely leaked across the internet.

It is not clear how much the scam ICO has raised

Techcrunch has reported a new situation. Gramtoken.io was the most prominent fake. The website, which is now offline, used details extracted from the whitepapers including project roadmap, team members and more. It even posted a copy of the whitepaper — which, again, had been leaked already — to give a sense of authenticity. The site’s tracker purported to have ‘raised’ more than $5 million before it went dark last Wednesday.

A number of those who invested in the scam took to Twitter in frustration after it was exposed. TechCrunch hasn’t been able to verify how much Gramtoken.io raised.

It isn’t clear why the site went offline. NameCheap, the company that hosted the Gramtoken.io domain, declined to comment when we asked if it had taken action. If Namecheap didn’t step in, it could be that the people behind Gramtoken.io decided to shut the party down before it drew too much attention.

Most of the scam ICOs are still online

Of the rest of the fakes, ton-gram.io, grampreico.com and tgram.cc remain online, Gramtoken.tech is offline, while a number of Facebook Pages, including one for Gramtoken.io, were taken private or removed after being called out as scams.

In addition, it’s reported that some scammers turned to email to blast out fake Telegram ICO investment opportunities.

In the case of one website, Ton-gram.io, more than 70 people have invested over $30,000 in Ethereum, according to a wallet address connected to the website. 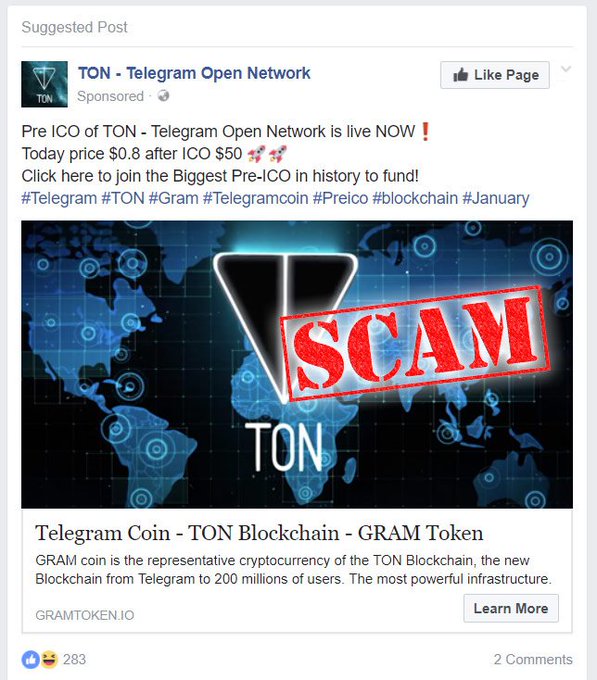 Another fake #facebook SCAM Ad for Telegram ICO $TON. There is NO ICO yet! You will lose your money! GRAMTOKEN.IO is fake! #crypto #altcoins #telegram #ico

Some users on social media felt the need to highlight these sites as investment opportunities while in the same breath cautioning that they may be scams. Perhaps in search of traffic or favorable Google search positioning, a number of ICO tracking sites listed the TON project which added further uncertainty. (Note, there is already a project — Tontine Trust — which offers a ‘TON’ token which is not connected to Telegram nor any of these fake websites.)

In an email to TechCrunch, Telegram CEO Pavel Durov acknowledged that Gramtoken.io was not associated with his company.

Weeks earlier, when the first reports of Telegram’s TON project surfaced, Durov warned users to rely only on information from Telegram’s broadcast channel but he made no further comment other than responding to one question on Twitter.

Attention: Telegram publishes its official announcements only at https://telegram.org . Everything else is most likely scam.

It goes without saying that ICO investments are risky, those thinking of taking part are frequently advised do their homework thoroughly. That includes making sure that the company has actually announced a token sale through official channels. If it looks too good to be true, it probably is.

“The more hyped the project the more likely are scammers going to resort to phishing sites,” a partner at a crypto-focused investment firm told TechCrunch on condition of anonymity due to sensitivities. “In some cases these sites even show up as top results in search. So it is extremely important that investors carefully verify the details from multiple sources before participating in a token sale.”