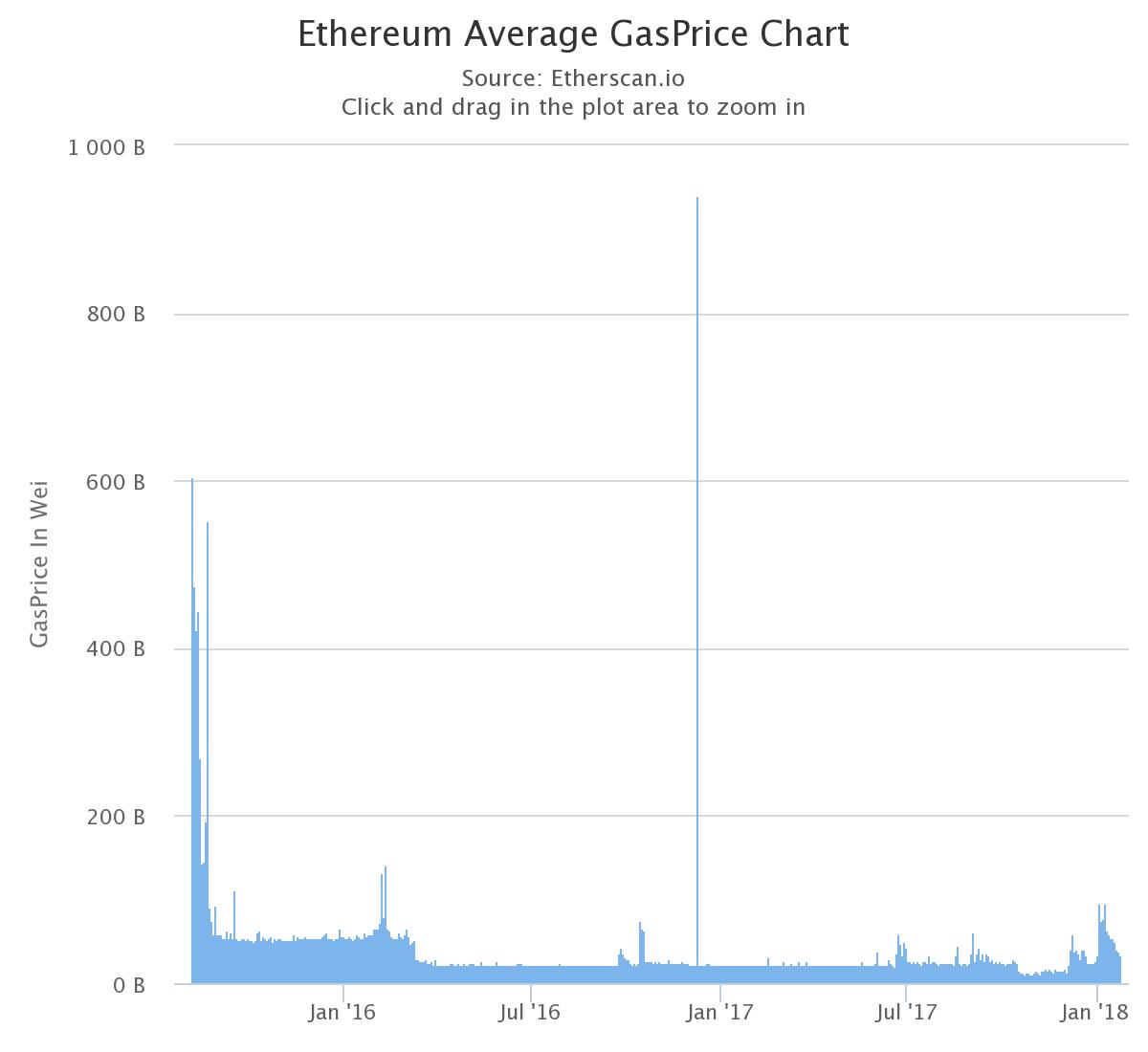 One of the main functions of cryptocurrencies is the low cost of transactions. But what happens if the price of gas price, transaction fee, rises? Can it threaten the Ethereum’s future?

Decentralized apps depend on Ethereum Blockchain and they need gas for transactions. Gas price has risen 100 times in year 2017 in line with the speculative growth in the price of ETH token. Ethereum’s blockchain now serves speculators at the expense of key users. With rising competition from Cardano, NEO, Qtum, and other platforms, Ethereum may lose its appeal to key users. Scalability issues and growing competition suggest that ETH may be overpriced at more than $1,000.

Ethereum is the most popular platform to create decentralized applications using blockchain (DAPPs). Ethereum’s tokens called “Ether” ((ETH)) are almost as popular as bitcoin (BTC) and they are traded in most of the cryptocurrency exchanges. Ethereum positions itself as a decentralized global computer to run smart contracts. Anyone with coding skills can create an application and run it on Ethereum Virtual Machine (EVM). Using Ethereum platform and EVM is similar to renting a car. Ethereum charges you for each line of code so that each line of code costs some gas. Thus, users need gas to run their applications on the Ethereum computer. Gas cannot be bought using fiat currency, it can only be bought using Ether token.

Ethereum platform no longer serves the purpose it was created for?

According to Seekingalpha contributor, Aydar Mannanov, despite positioning as a global decentralized computer and a platform to run DAPPs, the Ethereum platform no longer serves the purpose it was created for. The first problem of the platform is that it is becoming very expensive for its main users. We calculated the change in price of gas (aka renting costs).

The formula here just converts the price of gas from Ethers to dollars. Price of 1 million units of gas in USD = Average price of 1 unit of gas in Wei * USD/ETH * 1024

According to a news story by ETH News: Estimated gas price on the Ethereum network has increased substantially, an issue that seems to be affecting Geth and Parity nodes. To guard against prohibitively high gas prices, users have been advised to manually lower their gas estimates. After further correspondence with Griff Green, he explained that the gas issue is related to the way in which estimated gas is calculated. “The bug is this: basically Geth sets the result of the estimateGasPrice as the 50th percentile of the gas price in the last 10 blocks,” he explained. “If there were 100 txs [transactions] in each of the last 10 blocks (1000 txs in total for these 10 blocks) then Geth would order them from least to most [gas] and pick the one in the middle.”

Why is this method flawed?

“Somehow, there was a runaway reaction. The 50th percentile got really high and then because we are so centralized (more than 50 percent of txs use exchanges, MetaMask, MEW [MyEtherWallet] and none of them are checking ethgasstation.info to set their gas price manually, they all use this broken algo [algorithm]) it is stuck in.”

If I can put this in slightly simpler terms, the way that gas is calculated on Geth is using the median of the gas from the previous 10 blocks. This is publicly available and reproduced below:

Coindesk has published a story also about the rising cost of Ethereum gas prices. The price of ether is shattering all-time highs. Rising to more than $1,000 for the first time ever last week, the cryptocurrency has reclaimed its place as the second-largest blockchain by total value, days after being temporarily surpassed by Ripple’s XRP token. However, as with that controversial market move, the massive uptick in value bears a deeper look from more novice or potential investors.

Indeed, ether’s price rise has masked a wave of technical problems – issues that went so far as to cause the cryptocurrency to be taken off a major exchange this weekend. Largely discussed on internal developer channels, reports of the problems to the public have been unusually quiet, scarcely touching Reddit, Twitter and other active ethereum forums. But what may be most of note is not the scant reaction, but the fairly fundamental nature of the issues, as most relate directly to the most basic operations of blockchains.

For one, a glitch in the software that determines how much a transaction should cost to send – named the “gas oracle” – has caused a massive inflation in user fees, with some paying far higher than is necessary for a transactions to go through. If this seems somewhat unwelcoming to newcomers, it’s met by other issues. In another case, the computers that run ethereum are struggling to download a full history of its transactions. More forward-looking projects are showing signs of strain also. The test network for Casper, ethereum’s long-awaited ecologically friendly alternative to proof-of-work, and arguably a core tenet of its value proposition, is currently splitting into incompatible forks. In a reminder for those eager to hit it big on crypto, ethereum heavyweight Vlad Zamfir wrote in response to the issues:

“(Ethereum is) still not safe or scalable.”

As such, the comments may best serve as a note of caution, one that hints at the current state of ethereum and suggests the work-in-progress nature of cryptocurrencies more broadly.

Perhaps the most concerning issue is within ethereum’s algorithm to estimate transaction costs – leading users of wallets and exchanges to overpay for transactions by up to 70% percent.

Speaking to CoinDesk, ethereum developer Nick Johnson explained that this is due to a glitch in ethereum’s internal, automatic gas pricing function.

While the code had sustained the spike in transactions caused by the popular CryptoKitties app and the recent popularity of initial coin offerings, recently “something odd has been happening with the estimated gas price,” Johnson told CoinDesk.

Johnson explained that the gas oracle – today used by popular wallets such as MyEtherWallet, MetaMask, Shapeshift, and others – calculates transactions costs for users based on fees paid in the most recent ethereum transactions.

However, Johnson said in an email, “while it’s still possible to transact on the network at a fairly low price, the oracle started returning increasingly high estimates.”

According to Johnson, the core issue seems to be that some users were simply paying more to use the blockchain, boosting the gas oracle calculation.

Green praised Bittrex for flagging the issue by preventing new ether and asset deposit address generation – and while other major exchanges and wallets have yet to respond, Green told CoinDesk that he expects ethereum developers to release a new algorithm soon.

“This is just some random tech shit that devs have to deal with to keep the network alive.”

Adding to this, developers have been struggling to get network nodes to sync to the blockchain. Those that try either fail, or are faced with a long wait.

Stepping back, any new node that wishes to mine ether or run the blockchain as part of its own wallet is faced with this problem. And while the issue has circulating for some time, it has worsened in recent weeks.

According to Peter Pratscher, who runs the mining pool Bitfly, it’s down to a failure of a function called “warp sync” as a result of the current size of the ethereum state – a figure that equates to a current sum of all of ethereum’s computation, and is stored by all nodes.

Pratscher said that because of the failure of this function, “new nodes will need to do a traditional sync of the ethereum blockchain, which requires quite some time (in the range of several days).”

Discussions are currently underway on how to reduce the size of the ethereum state, including the idea of deleting what is known as “dust accounts” – empty addresses that have been inactive for a long time.

“I hope that the dev teams will get ahead of the issue and provide some improvements in this regards.”

While a smaller issue in comparison, largely because it doesn’t impact the live ethereum network, the problems facing the Casper test network also provide evidence of the early-stage nature of ethereum as a technology.

Perhaps due to the pressure felt for ethereum’s need to scale, Casper development efforts have surged in recent months, however, the nascent test net is currently splintered, and nodes cannot connect to the blockchain.

As a result, the test network, which was hoped to renew a source of “fun” in testing environments, has largely fallen silent.

Speaking to CoinDesk, prominent Casper developer Karl Floersch asserted that this has nothing to do with the Casper code itself, which is “working exactly as expected with no hiccups.”

Still, given the new nature of the testnet, developers have been quick to suggest a range of possible issues and fixes that could once again see a jumpstart in activity.