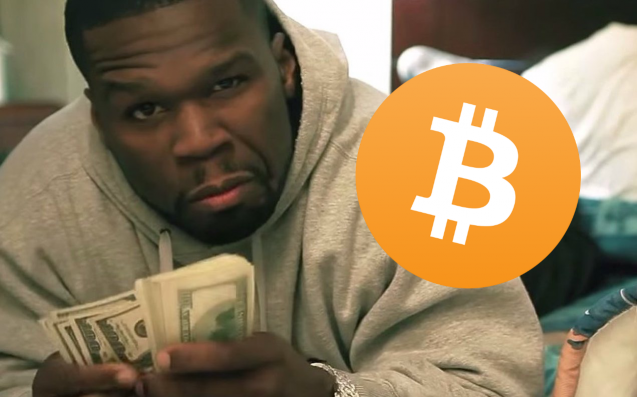 Update: 50 Cent admits in bankruptcy document that he never actually owned any bitcoin

50 Cent admitted that he did not, in fact, make $8 million in bitcoin by accepting the cryptocurrency as a form of payment for his album Animal Ambition back in 2014. In a Friday court document obtained by The Blast, the rapper admits that he has never owned bitcoin, and only went along with the initial report from TMZ because “so long as a press story is not irreparably damaging to my image or brand, I usually do not feel the need to publicly deny the reporting.”

He added, “This is particular true when I feel the press report in question is favorable to my image or brand.” It did make 50 Cent initially look like a baller when, at the height of bitcoin’s value, he appeared to be $8 million deep in cryptocurrency. But, to prove that he is bankrupt, he ultimately had to reveal that he does not own any bitcoin. It’s unclear whether 50 Cent is lying to bankruptcy court or earlier on social media. His reps did not immediately respond to comment.

50 Cent admitted in the bankruptcy documents that recent media reports have “falsely stated” that he made $8 million in bitcoin (none of which he had disclosed to the bankruptcy court). In reality, he says, he has never owned any bitcoin “from 2014 to the present.” The 700 bitcoins he reportedly earned from album sales were converted to US dollars by a third party before 50 Cent or his affiliated companies could receive it.

Previously, 50 Cent bragged about his sudden bitcoin “wealth” on Instagram and Twitter posts, posting “Not bad for a kid from South Side, I’m so proud of me” and “A little bitcoin anyone? LOL. l know l make you sick but excuse me…I’m getting to the bag.” Perhaps his Instagram reply to his fans was a little more honest, or at least hinting at the truth: “Ima keep it real, I forgot I did that shit lol.”

Source: The Verge
OLD ARTICLE
Rapper 50 cents joins the bitcoin millionaire list. The list of Bitcoin millionaires is increasing day by day. Rapper 50 cents is the latest addition to the list. The rapper started accepting Bitcoins during the sale of his album animal ambition. This was way back in 2014. Since then, the value of Bitcoin has increased tremendously. At that point in time, the album was moderately successful as well.

The celebrity gossip website TMZ had reported that he had managed to gather around 700 Bitcoins from the sale of his album. At that time, the amount was worth $ 0.4 million. According to the current valuations, it is worth around $ 7 million-$ 9 million.

The artist himself confirmed the news published online stating that he was proud of his achievement. He also stated that he actually had forgotten about the Bitcoin sales which he had got for his album.

He has also invested in other ventures which have been quite successful like Glaceau where he was an early investor. The company eventually got acquired by Coca-Cola for $ 4.1 billion. Also, he has investments in many different sectors like dietary supplements, real estate as well as a clothing line.

This widespread acceptance of Bitcoin has only added to the credibility of Bitcoin. As more and more vendors start accepting Bitcoins, you can be sure that the credibility of Bitcoins would increase more. This would also lead to increasing the value of Bitcoins. Currently, after touching a peak of $ 20,000 or so, Bitcoin is trading around $ 4,000. This fall is attributed to the crackdown on the cryptocurrency by various governments all around the world. Once that gets sorted, chances are Bitcoin would again resume its a journey upwards. This is the reason why many investors are still investing in Bitcoins with the hope that it would be able to cross the previous highs quite soon and create new highs.

With the passage of time, there would be more and more stories of Bitcoin millionaire so decided to use it or invest in it once and then, later on, forgot about it.

There are plenty of well-known critics of Bitcoin in the banking and business worlds. Recently, Jamie Dimon, chief executive of JPMorgan Chase & Co., called the cryptocurrency a “fraud” and said it would blow up. He even went so far as to say he would fire anyone who traded Bitcoin because “they are stupid.”

But not everyone’s so dismissive. Bitcoin has had a bullish run in 2017, rising from $966 at the start of the year to a record high of more than $4,000 this month, and some major holders of the currency are no doubt looking to cash in on its value. The names might surprise you. While Bitcoins allows for anonymity, using strings of letters and numbers to identify sources of transactions, certain people have publicly revealed that they’re enthusiastic users. Here are the people with the biggest known stakes in Bitcoin.

You likely know Tyler and Cameron Winklevoss, who tried and failed to gain control of Facebook after alleging that it had been appropriated from them, thanks to Armie Hammer’s satirical portrayal of both siblings in The Social Network. But the Winklevii have a second act in their enormous Bitcoin investment. While they were shut out of creating a Bitcoin exchange traded fund (ETF), their 2013 investment in $11 million worth of Bitcoin (which reportedly amounted to one percent of all the currency in circulation) looks pretty rosy now. That same amount is worth approximately 21 times as much now, putting their total at about $231 million.

Silbert, a venture capitalist and founder of Digital Currency Group, was an early proponent of Bitcoin. He reportedly nabbed 48,000 Bitcoins in an auction held by the U.S. Marshals Service in 2014 (the government had seized much of the currency from Silk Road, an online marketplace it said was used for illegal drugs). Bitcoin was then worth $350, which means Silbert’s haul has climbed about 16 times, from approximately 16.8 million to $268.8 million.

Draper, a venture capitalist worth billions thanks in part to his early investment in Skype, made headlines for his purchase of 30,000 Bitcoins in 2014 from that same government auction. Then worth about $19 million, that stash would be up to $171 million now. Draper is clearly feeling optimistic about the digital currency market, as he’s gone on to back Tezos, a new cryptocurrency.

Shrem is more infamous than famous. The entrepreneur got in on the early days of Bitcoin and was a member of the Bitcoin Foundation, which was supposed to protect the use of Bitcoin but has seen several of its leaders under criminal investigation. Shrem himself received a two-year prison sentence for charges related to money laundering. But he’s now back with a crypto-investment startup, and while he hasn’t disclosed exactly how much he owns in Bitcoins, he reportedly bought a few thousand back when they worth were little, and those would be worth several millions now.

Gallippi is the cofounder and chairman of Bitpay, currently the leading Bitcoin processor, and is said to be among the largest holders of the currency. While he hasn’t disclosed the exact value of his Bitcoin investments, estimates have put it around $20 million.

Nakamoto is the shadowy figure sitting at the heart of Bitcoin, which itself still confounds so many. After inventing Bitcoin with a 2008 white paper describing a software tied to digital currency, Nakamoto retreated from public life. People aren’t even sure if that is his (or her) real name. While one man came forward to say he was Nakamoto, online sleuths disputed the evidence. Theories abound as to who Nakamoto really is, but it’s clear they have a whole lot of Bitcoins at their disposal. A Bitcoin developer estimated in 2013 that Nakamoto had around 1 million Bitcoins. At a valuation of about $6,133 as of this writing, that would be theoretically worth an astounding $6.1 billion. A huge caveat here, though: If Nakamoto were to start selling off their entire supply of Bitcoin, it would rapidly drive down demand for the currency, and therefore the value of the holding.

Perhaps the biggest surprise of all is that Bitcoin, a software-based currency that’s supposed to be free of traditional currency restrictions, has already provided a lucrative payout for the federal government. As noted above, the FBI seized 144,000 Bitcoins while shutting down the Silk Road marketplace in 2013, which back then made it the owner of the biggest Bitcoin wallet (though not necessarily the entity with the most Bitcoins, as they can be spread across many wallets). The government then auctioned off the Bitcoins. collecting $48 million. It could’ve made a lot more money if it had waited on the sale, but Uncle Sam is still trying to get a piece of the Bitcoin action. The IRS has declared that digital currencies are taxable property, and is waging a legal battle to unmask Bitcoin users who haven’t been properly disclosing their capital gains and losses. Reports suggest that the vast majority of Bitcoin transactions go under the radar. That could mean potentially millions more for the feds to take as their own.