Following the run-up of Tuesday morning, Fundstrat Crypto Analyst, Tome Lee who is a supporter of Bitcoin (BTC) was hosted on CNBC to deliberate on why Bitcoin (BTC) could record further moves on the upside. The analyst believes that a moon boom is in the cards for the world’s most valuable cryptocurrency by market cap. 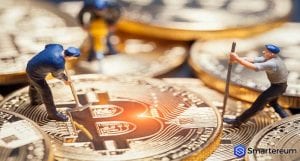 Lee was introduced during the CNBC program by Fast Money host, Melissa Lee. She stated that Lee has two tables that could indicate a “Bitcoin moon boom.” Lee talked about Bitcoin’s (BTC) 200-day MA stating that the digital token is approximately 30% below the 200 MA as of press time. While a shift below a moving average, has often been characterized as a negative signal, Lee believes Bitcoin’s (BTC) current situation via the 200 MA is a “positive signal.” Some viewers of this range would see his view as questionable, but Lee pointed out that the current price movement for Bitcoin (BTC) is a positive signal.

The Fundstrat Crypto Analyst and Bitcoin (BTC) proponent also believes that the aforementioned price signal for Bitcoin (BTC) is bullish, the same thing applies to other technical and fundamental signs. As is the case with any financial market, there isn’t often a single catalyst responsible for a price rise or decline in price.

Lee is a long time Fundstrat Crypto Analyst and Bitcoin proponent he is regarded as the face and serves as a representative of Bitcoin’s (BTC) bulls, has continually called for the digital token to hit 25,000 USD against the USD by January 2019. With his recent statements regarding the crypto, it is now clear that Lee’s stance regarding the crypto market is bullish, despite the issues that have rocked the crypto space in recent months with Bitcoin (BTC) falling by 60 percent in value since the start of this year.