TRON will release an updated version of its virtual machine on July 30. The latest version will come with improved accessibility and security, with an aim to fully support the efficiency and security for developing smart contracts. It is said that TRON will eventually set up a middle layer to accommodate virtual machines for EVM and EOS subsequently, in order to attract more developers to the TRON network and eventually build up a more prosperous TRON ecosystem. TRON has officially launched the test version of the TRON Virtual Machine (TVM) on May 25, 2018 (Beijing Time).

What is a Virtual Machine

A virtual machine (VM) is a comprehensive computer system simulated by software and equipped with full hardware system features, running in a separated environment, such as the virtualized physical machine VMware and Java VM. As for the Ethereum Virtual Machine (EVM), it runs in an environment based on codes established on the Ethereum blockchain and is mainly for processing smart contracts within the Ethereum system.

Simply put, EVM is a completely independent sandbox, whose contract codes are fully separated from the outside and run within EVM. Due to the distributed storage manner of EVM on the computer of each node, it’s suggested that companies that are creating smart contracts use programming languages like JavaScript and Python to create apps that run on EVM. In addition, EVM is able to separate from the rest of the mainnet to avoid impacts on the operation of the main blockchain. As a result, Ethereum is sometimes called a “world computer”.

To reduce resource consumption and assure system performance, EVM doesn’t adopt the pattern to simulate a whole computer; instead, it adopts a more lightweight VM structure.  According to the developing team of EVM, the designing goal is to create a simple, defined, easy-to-optimize, room-saving system that guarantees security and runs exclusively on blockchain. In addition, on the Devcon 3 conference in 2017. the Ethereum developers also rolled out Solidity, an advanced programming language, which is based on Ethereum’s digital distributed coding contract, aiming to extend the application of the technology.

Theoretically, Ethereum is Turing-complete. Its VM provides a foundation to realize the smart contract, so that operations of any complexity level can be realized. However, there are still some issues: the common language used by EVM, Solidity, lacks a stand library; the stack-based structure is easy to optimize but requires more opcode, etc.

TVM can connect seamlessly with existing development ecosystem and supports DPOS. TVM is able to be compatible with EVM environment in the beginning, so that instead of learning a new programming language, developers can develop, debug and compile smart contracts in a Remix environment with Solidity and other languages. Once you’ve built and uploaded your smart contract to TRON’s mainnet, it will be executed on the TVM of the SR node to be isolated from external connections.

Furthermore, TVM employs the concept of Bandwidth. Different from the gas mechanism on EVM, operations of transaction or smart contracts on TVM are free, with no tokens consumed. Technically, executable computation capacity on TVM is not restricted by total holding of tokens.

TVM adopts a lightweight architecture with the aim of reducing resource consumption to guarantee system performance.

With a meticulous design paradigm and fine-grained underlying operation code, TVM can guarantee the preciseness of every step of a computation, diminishing ambiguity to the largest extent. Out of security reasons, transfers and smart contract running cost only bandwidth points, not TRX, which exempts TRON from being attacked similarly to Ethereum for its mode of gas consumption. Stability of bandwidth consumption is achieved while the cost of each computational step is fixed.

Currently, TVM is compatible with EVM and will be with more mainstream VMs in the future. Thereby, all smart contracts on EVM are executable on TVM. By connecting seamlessly to existing development ecosystem, higher efficiency can be achieved by developers. Needless to learn a new programming language, they can use mainstream programming languages for smart contract such as Solidity to develop, debug and compile smart contracts in the Remix environment, which greatly reduces development costs.

Thanks to TVM’s bandwidth setup, developments costs are reduced and developers can focus on the logic of their contract code. TVM also offers all-in-one interfaces for contract deployment, triggering and viewing, for the convenience of developers.

The following interfaces are available in Tron Wallet-CLI:

Developers can call these interfaces to deploy, trigger or check smart contracts. 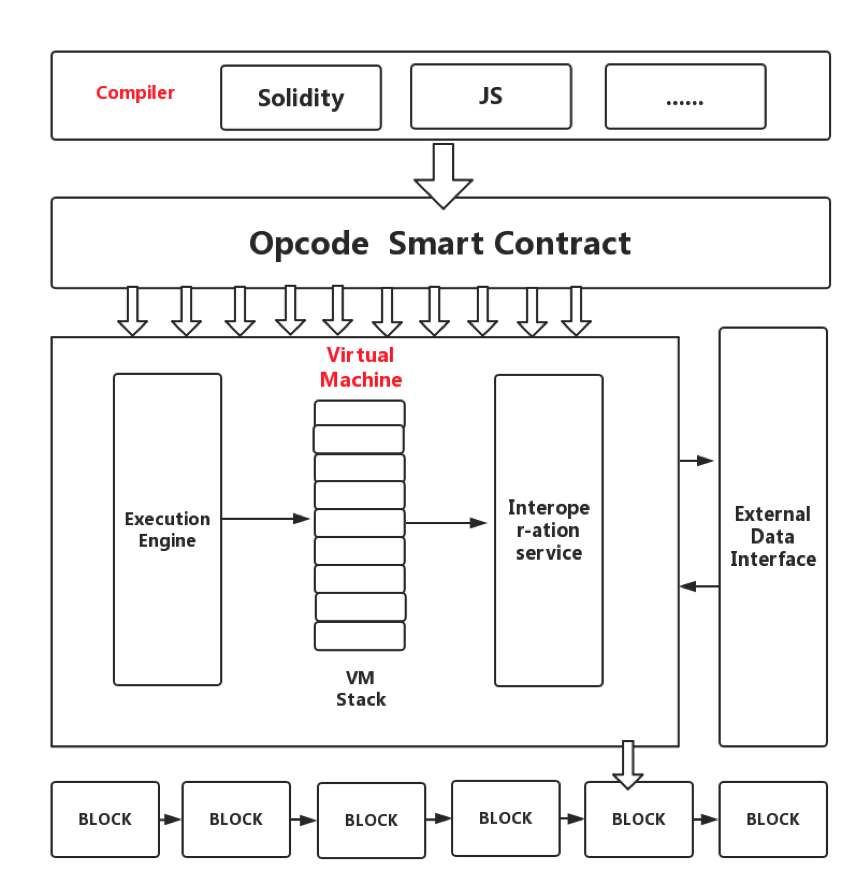 The above flowchart shows how TVM works:

Put simply, the flow is as follows:

Tron will be committed to the development of optimized debugging tools and the establishment of standardized symbol and data format, for improved developer efficiency.

Different from gas consumption mechanism for every transaction on EVM, there is no charge on TVM. Each operation only occupies bandwidth, which will be released within a certain amount of time after completion of transaction. It takes developers very little to develop smart contracts with more complex logic. It is our belief that besides being used for digital asset transactions, smart contracts could also be suitably applied to areas such as game development, financial risk modeling and scientific computing. The design of TVM inherently supports multi-scenario tasks, and further optimizations of processing speed, response time, and floating point compatibility.

Meanwhile, Tron is planning to further optimize its TVM based on WebAssembly (WASM). WebAssembly, spearheaded by Apple, Google, Microsoft and Mozzila, is designed to break bottlenecks of current Web browsers and can be generated through compiling C/C++ and other programming languages.

Integrating WASM, TVM will be able to provide high performance and high throughput for blockchain to cope with complex scenarios.