Recently, a lot has been going on in the blockchain industry. It was reported on June 19 by Bianews that TRON had already bought BitTorrent for USD$140 million a week earlier, which made it the center of attention within the industry.

BitTorrent is a P2P file-sharing communication protocol facilitating the distribution of data and digital files. It is one of the most used protocols for the sharing of large video or audio files.

BitTorrent is not only the owner of a seed protocol, but it is also an active actor in the entertainment industry thanks to BitTorrent Now, which helps independent artists and music artists publicize their work.

According to BitTorrent itself, the protocol has up to 170 million monthly users. Both Facebook and Twitter use BitTorrent to distribute updates to their servers. Florida State University also distributes large-scale scientific data to its researchers via BitTorrent. The game World of Warcraft produced by Blizzard Entertainment is downloaded by users with the help of BitTorrent. Transmission of data on the protocol allegedly takes up 40% of daily Internet traffic on a global scale.

Frankly speaking, BitTorrent has already lost its vitality in the classical Internet. But in the new Internet represented by the blockchain, a truly decentralized network will definitely rejuvenate the BitTorrent protocol.

It is reported that, there were unsuccessful attempts from Akamai and Rovi (now TiVo) to acquire BT. But in the end, it is TRON who made the acquisition happen. 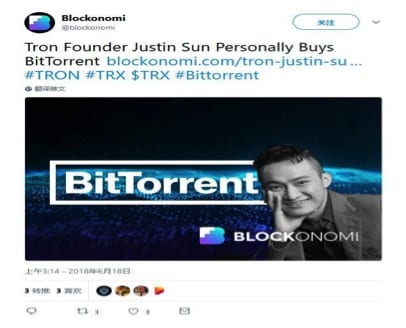 TRON is a new member of the blockchain startup family. It is founded by Justin Sun, who formerly worked for Ripple (a settlement system based on blockchain technology). TRON is committed to building “the infrastructure for a truly decentralized Internet”, an effort of which is the creation of TRX, its cryptocurrency for the entire entertainment industry. TRON is expecting TRX to become a means of payment for contents on its network.

May 31 marks the official launch of TRON’s public blockchain mainnet. On the launching ceremony, Justin Sun compared Odyssey 2.0 to the Apollo program of the US and said, “Odyssey 2.0 is a small step for TRON, but a large step for the blockchain technology.” He also added that now there were 1.08 million TRX holders, more than Bitcoin and Ethereum.

The mainnet launch was live streamed on Yizhibo, Periscope, YouTube and other platforms. TRON’s community members from China, Russia, Korea and Japan, just to name a few, were actively engaged via online channels. According to TRON, the live streaming had over 30 million viewers on the day of the launch. TRX holders were glad to be there for the historical moment, with ever-increasing confidence in the future of TRON.

Now, after the 25-day testing period of the mainnet Odyssey 2.0, TRON’s mainnet was officially initiated at 10:00 AM, June 25 (GMT+8), when the community reached consensus.

On June 25, TRON completed its mainnet token migration, officially independent from its previous ERC20 token identity. During its live-streaming on the TRON Independence Day, Justin Sun announced that his team was concentrating on the iteration of the TVM, which was scheduled to be released on test.tronscan.net on July 30.

What is TRON’s next move after its mainnet launch and the BitTorrent acquisition? There is no official response from Justin Sun or BitTorrent yet. But a stakeholder disclosed that there were two other plans. The first is to “legalize” TRON’s business, which is currently caught up in controversies. The other is to transform BitTorrent into a mining network with the help of its P2P network and the massive user base.

Meanwhile, the extensive BitTorrent P2P network can directly become the storage layer of the TRON Protocol, which will give TRON 170 million new auxiliary nodes. This will greatly enlarge the scale of the network to surpass Ethereum and EOS by a large margin.

With the integration of BitTorrent’s 170 million users, Tron’s user base also witnessed a soaring growth to 1.096 million users. Its market value reached 17 billion RMB, ranking the 11th among all cryptocurrencies.

The integration of a P2P communication protocol and an open-source decentralized content entertainment protocol based on blockchain technology will allow BitTorrent and TRON to complement each other’s development and yield more fruitful results than development on their own. By then, TRON’s growth will be phenomenal. At the meantime, BitTorrent will also benefit from the blockchain technology.