Smartereum
Home Uncategorized EOS Attempts To Break The Bearish Resistance As It Beats Ethereum In...

EOS traded sideways almost throughout last week. The bulls kept trying to break the resistance but the bears fought them off with a strong resistance at $8.84. The cryptocurrency was trading sideways in range between $9.0 and $6.5. Today, EOS is trading at around $8.3 but traders are afraid of initiate trades as they await more significant price movement. The signal line and MACD of EOS are near zero indicating that the price action is neutral. Also, the price of EOS is not above or below the 26-day EMA and the 12-day EMA. This is an indicator of a sideway pattern. The relative strength index is around 50 which is another sign of a sideways trend. This is according to the price analysis of Azeer M on Bitcoin Exchange Guide. 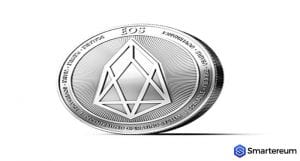 The EOS platform has been under a lot of pressure since the Mainnet saga. For a cryptocurrency that is battling with many issues, the price of the token is doing fairly well. The good news is that EOS had a breakthrough when it beat Ethereum in transaction volume. This was reportedly as a result of a spam onslaught on Sunday. EOS took the second spot in the transaction volume rank after it beat Steem and Ethereum just within a few hours of spiking. Currently, EOS is the number one cryptocurrency per transaction volume according to the reports on Blockivity.

After the transactions were forwarded, EOS surpassed other cryptocurrencies by performing transactions of 3k per second. This is way above the typical transaction speed.