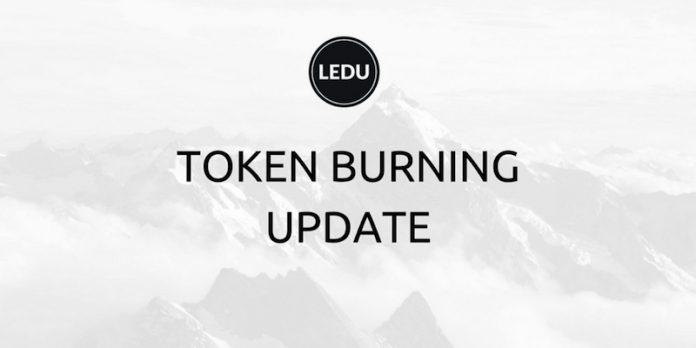 Education Ecosystem announced that at the end of July, 30 million LEDU tokens would be burnt as the result of a change in the subscription model for their first product – the LiveEdu platform. However, due to the current negative conditions of the cryptocurrency market, they recently stated that the token burning would be delayed.  Conducting the token burning at this time would not be beneficial to LEDU token holders and the overall community.

Once market conditions improve, then the burning will be carried out within the next 7 days and an update will be provided following its completion. To carry out the token burning, technically there are two main options which would provide full transparency for token holders.

The first option is to send tokens to an address where the private key is unknown and the tokens cannot be recovered. The perfect address for this purpose would be the genesis address which is not owned by anyone. Tokens sent to this address are considered lost and it is an effective method to carry out token burn events.

The second option the team discussed was the creation of a self destructing smart contract which would be destroyed after receipt of the LEDU tokens.
Ultimately, the team decided to go with Option 1 as it represented the simplest, quickest and most effective method to carry out the token burning. Once the burning is completed then the address where the tokens were stored will be published as well as the tx hashes for the burn so that token holders can verify for themselves.

Get LEDU coins now with ETH or BTC on Livecoin, Mercatox and Exrates. Read more about LEDU coins on their project page and ask any questions you might have in their Telegram group chat.