The company behind the Finney Phone, Sirin Labs, may have abandoned IOTA and shifted its focus to Ethereum for the production of the blockchain oriented device. Initially, Sirin Labs announced that it would developing its phone based on IOTA’s blockchain technology. This was not a surprise to the blockchain industry since IOTA has been one of the networks that has shown genuine interest in IOT devices.

The announcement only made the IOTA community more vigilant as it waited for more updates about the partnership. The new reports, however, is that Sirin Labs will no longer depend on IOTA for the project. The CEO of Sirin Labs, Moshe Hogeg said:

“We are not working with IOTA. We considered the option and decided to path ways. At launch, we are going to use the Ethereum blockchain. The Finney Phone will work through complete nodes that are hosted on Sirin Labs.”

Instead of IOTA Sirin Labs will be building the phone based on a private Ethereum blockchain. This news came as a surprise to the IOTA community and to all those who have been interested in the project. While Sirin Labs didn’t give any details about their decision, there is the possibility that it was made because the IOTA project is not yet mature. 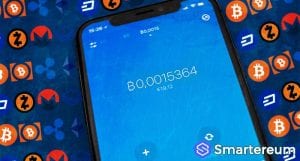 The Finney Phone Is Set For Release In November

The Finney Phone will most likely be released in November 2018. So, it is important that the company is backed by a solid blockchain project to ensure long term success. The team stressed that Ethereum is only going to provide a temporary solution. The long-term goal of the company is to adopt a third generation blockchain that can run their token securely, and fast. They want something that is highly scalable. This is why they have evaluated projects like IOTA and Cardano. However, their ultimate solution is going to be a native blockchain.