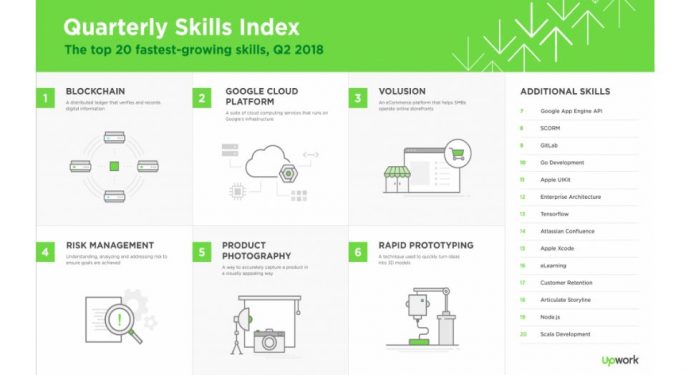 Global freelancing website Upwork has released its quarterly skills index for the second quarter of 2018 and unsurprisingly blockchain skills topped the list of over 5000 skills. According to the report released by Upwork, Blockchain was the fastest growing skill for freelancers in the United States.

The demand for talent with blockchain-related skills doesn’t show any signs of stopping. According to the latest Upwork Skills Index, #blockchain is the fastest-growing skill in the U.S. #freelance #job market for the second quarter in a row. https://t.co/oeGV3ZXcol pic.twitter.com/6pRldangX7

Interestingly, other blockchain-related skills made to the list of top ranking skills; Go development was one of them. Go is a programming language created by Google and used to develop blockchain applications.

The dominance of Blockchain Jobs

This would be the second time in a row blockchain has topped the list. Blockchain was also the only skill that maintained its position on the top 10 fastest growing skills from last quarter.

The dominance of blockchain and cryptocurrency skills in the Upwork index dates back to the third quarter of 2017 and coincides with the historic surge in bitcoin price which got many people interested in cryptocurrency and blockchain technology. Almost out of nowhere, blockchain skills have taken unprecedented leaps to become the most prominent skill among US freelancers. A section of the Upwork report said of blockchain:

Blockchain Careers are Growing in line With Increased Investments

While blockchain developers are the most commonly referenced blockchain jobs, there are quite a number of blockchain related. Other burgeoning careers in the blockchain space include blockchain designers, quality engineers, project managers and legal practitioners.

Due to the peculiarities of blockchain technology, there is demand for blockchain-specific skillset over the more general careers. Also, this growth is in line with increased funding for expansion for blockchain-based projects and startups.