Link sharing has become so commonplace that we barely even notice we’re doing it anymore. Posting the latest industry news on LinkedIn, sharing a hilarious video on Facebook, or retweeting a friend who is asking for recommendations—all have become part of everyday life for users of social media.

In general, this shift has happened without most social media users receiving any direct benefits from the sharing they do online. Additionally, this lack of incentive means that social media feeds are increasingly filling up with reposts, ads, and information that is becoming less and less relevant to the user.

Now, a new tech company is developing its own incentive-based sharing model and is set to rival the big social medial platforms. 2Key has developed an innovative protocol and platform for tracking and incentivizing the sharing of links that users find valuable.

How is this possible? By harnessing the power of blockchain and smart contracts.

How Does 2Key Work?

2Key comprises a protocol and a network.

The protocol combines a standard http web link with an embedded smart contract which enables multi-step tracking capability. The smart contract is able to track and trace each time the link is shared within the 2Key referral network.

The network is the platform, which is essentially a social sourcing marketplace for users. This network is also the use case for the 2Key protocol.

A user can set up a link on the 2Key network by staking the native system tokens, also called 2KEY. The user defines targets for how they want the link to perform, for example, sales conversions or client signups. When a target is reached through the link being shared around the network, those who participated by sharing are provided with a reward, which is a portion of the tokens staked by the initial user.

This can be illustrated by a simple example. Let’s assume there is a small business selling almond-based products, called Almonds4U. The company decides to promote its products, with the objective of increasing sales. The marketing manager sets up a link on the 2Key network and stakes 100 2KEY tokens.

The 2Key tokens staked by Almonds4U at the start are then distributed to BrazilNuts4U, Coconuts4U, and all of the other parties who shared the original link, for their efforts in making the conversion to a sale.

The previous example was simple for the sake of illustration. In reality, the 2Key network will encourage targeted referrals to those who are most likely to share or convert.

Algorithmic game theory will work on a reputation-based model to combat spam users on the platform. Let’s say a malicious spammer gets hold of the link from Almonds4U and starts targeting it to people with nut allergies. The 2Key platform will actively penalize the reputation weighting of this spammer on the network.

Conversely, those who successfully share within a chain that converts to a result will enhance their reputation and thus their earning potential for making successful conversions. Such an incentive-based system ensures that users will carefully consider who they are sharing each link with, in order to protect their reputation and their earning potential.

Although the example used here is in the context of a small business, 2Key could be used by any kind of individual or company seeking referrals. This could also include freelancers and consultants, or courses scouting for student signups, for example. The network will be completely open to all users, without barriers to entry such as requiring token ownership to register.

The entire ecosystem represents a seismic shift away from the current models used by centralized tech giants like Facebook and Google. Whereas these companies target ads towards users who tend to willingly share content for free—thereby allowing the companies to keep all of the profits generated by advertising for themselves—2Key is entirely decentralized and incentivizes users to share only the content that their network will find interesting.

The 2Key team has a background rooted in the development of technological innovations. The senior leaders have extensive experience in areas including AI and machine learning, in addition to blockchain technologies. The team has recently signed on Nimrod Lehavi as a new advisor. Lehavi is the co-founder and CEO at Simplex which is a market leading fintech company. It uses AI technology to secure online payments against fraud partnering with well-known names in the crypto space, including Bancor and MyEtherWallet. 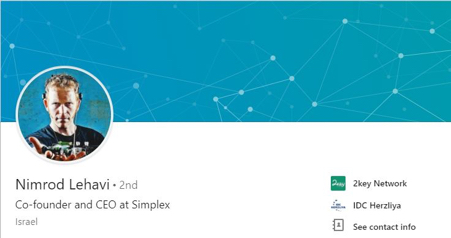 At launch, 2Key is aiming to allow users to obtain 2KEY tokens through exchanging major cryptocurrency tokens. However, the addition of Lehavi to the team is a critical step for the company in building market-leading solutions for users to exchange 2Key tokens.

2Key has already secured a $1m seed investment and is set to launch the beta version of the product interface over the coming weeks. As part of the ICO, there will be a limited supply of 2Key tokens, minted only once. The token sale will also be open soon, and pre-registration details will be released imminently. Further information is available in the 2Key white paper, or you can follow its group on Telegram.