EOS has maintained top spot in the monthly ranking of blockchain projects released by the Chinese government for the month of August. Ethereum [ETH] was once again rated second while Bitcoin [BTC] made the top 10 for the first time since the rankings began in May.

The Public Blockchain Ratings is created by the China Electronic Information Industry Development (CCID) Research Institute and the China Software Testing Center. It sampled contributions from professors and researchers at notable institutions like Tsinghua and Beijing University. For the ranking, CCID access three sub-indexes, viz. the application, the technology, and the innovation of each project.

EOS, which was unavailable for the inaugural May edition of the rankings, stole the show in June just as it concluded its record ICO. The EOS project, which to building a usable blockchain-powered decentralized cloud operating system, has now been ranked top by the Chinese index for three consecutive editions. It ranked the highest for Technology; EOS blockchain capable of handling a lot more transactions compared to the blockchains of bitcoin and ethereum.

Ethereum [ETH] came in at second position with a total of 139 index points while Komodo moved six places form the last rating to complete the top three. The biggest movers from last month were Komodo, Nano, and Bitcoin. Based on total points, the biggest improvements were EOS, Nano, and Komodo. 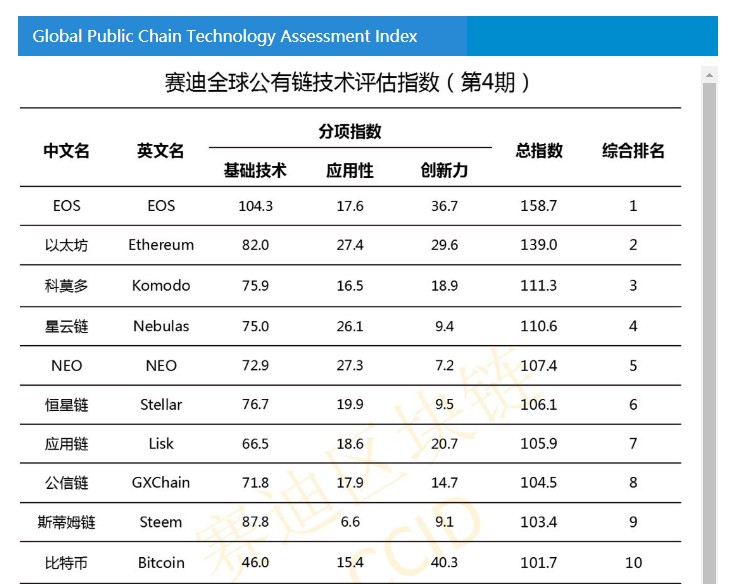 Bitcoin [BTC] was rank 10, its highest-ever position since the ratings began. This can be attributed to its latest core update which the CCID said is “very active”. This earned it 40.3 points in the innovation sub-index—the highest on the list.

Other blockchains that completed the top 10 in order are Nebulas, NEO, Stellar, Lisk, GXChain, Steem, and Bitcoin. Two new projects, NULS and Tezos, were added to the list increasing it to a total of 33 projects. They were ranked at in the 21st and 28th respectively.