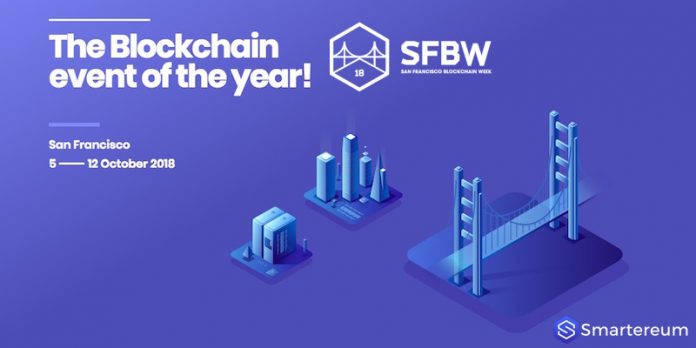 On October 5-12, San Francisco Blockchain Week looks to re-focus the blockchain community on what really matters: the technology behind blockchain, not the money.

Throughout the week, issues such as scalability, identity, privacy, decentralization, and future topics currently discussed in academia, but rarely discussed in depth by the general public, will be highlighted. SFBW strives to educate developers, consumers, and entrepreneurs on technical topics and familiarize them with leading projects currently in development. This week-long, immersive experience aligns projects with the community by giving teams a platform to teach, and the community an opportunity to learn all in one place.

“The blockchain community in San Francisco has realized that there is too much noise and not enough substance at most events today,” said Ronen Kirsh, the event coordinator and managing partner at Dekrypt Capital. “As a result, we created San Francisco Blockchain Week to be a community event focused on high-quality education that engages both new consumers as well as experienced developers.”

Education and Development: A plethora of free educational events, developer workshops, meet-ups, and deep dives will be hosted in various locations throughout the city. In addition, UC Berkeley will host a blockchain academy for executives looking to learn more about blockchain technology.

Community Building and Recruiting: With so many talented community members in attendance, San Francisco Blockchain Week will host a job fair, recruitment workshops, and community building activities for various projects.

“San Francisco Blockchain Week is a great chance for people to learn about and get interested in blockchain. Hosting ETHSanFrancisco here at the start of the week will give developers a way to really dig deep into new ideas, meet other developers and build things – all of which are key to growing the Ethereum and blockchain community in San Francisco,” said Kartik Talwar of ETHGlobal.