Yesterday, altcoins suffered significant losses after Bitcoin took a bearish slope. This morning, the tides have changed for some while others are still red. While the altcoins are trading in green now, they may start trading in favor of the bears soon. If the sellers show up again, the price will crush significant support lines. Traders have been advised to hold of on selling Litecoin and Stellar until the price of Litecoin calls below $50 and the price of XLM falls below $0.18.

Yesterday, ADA fell by 10% but the price has moved up today and it is now trading near a significant support line. The altcoin was able to hold the gains above a resistance it formed at $9.5. The bears were expected to push the prices south. This happened yesterday and ADA almost reached a new all time low of $0.6. The bearish move yesterday will most likely push the price into a tight range so it’s a good idea to avoid any long-term moves for now. ADA is still trading in red against the USD at $0.074093. It is down by 1.38% against the USD and 1.96% against Bitcoin.

Litecoin has a lot going on per development. Not too long ago, LoafWallet started inviting Beta testers for its next release. This platform is going to allow direct fiat purchases using Litecoin. This announcement is expected to cause a rise in the price of Litecoin as well lead to increased adoption. Yesterday, Litecoin was one of the cryptocurrencies that suffered losses. A high volume bar was formed by the bears in the market but this didn’t stop the fall. Fortunately, the $50 support level was not broken. However, there is no saying what the trading session today will be like. The altcoin is currently trading in green at $53.11. This shows that it is up by 2.17% against the USD and up by 1.99% against Bitcoin. If the bears later take over and the price breaks the $50 support, the next support will be at $30.

EOS recently launched the EOS Lynx that takes a few minutes to create and use. The price, on the other hand, is still facing bearish pressure like other cryptocurrencies and altcoins. Yesterday, the price fell below a significant support. It fell by 12% against the USD leaving investors discouraged. The price fell because the buyers were unable to gather the momentum required to cause a spike. At the time of writing, EOS was trading at $5.19. This shows that it is down by 2.59% against the USD and 2.85% against Bitcoin. 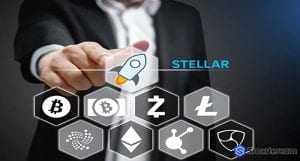 Throughout last week, Stellar was consolidating its loses. The bears pushed the price below a significant support thus inviting sellers to the market. The bulls may take the price North today. At the time of writing, Stellar (XLM) was trading at $0.214722. This shows that it is down by 0.11% against the USD and down by 0.31% against Bitcoin.

The next few hours will determine if the weekend trading session will be in favour of the bears or bulls.