Tron (TRX) has been sounding its trumpet in the crypto space since its inception. Tron is a decentralized internet startup. The blockchain project has refused to slow down when it comes to promoting its digital currency. Tron (TRX) even became more popular after the launch of its Mainnet. This is due to the numerous developments, news and partnerships it has secured since then.

The founder and CEO of the blockchain project – Justin Sun – has also been very outspoken about the project. He has been at the forefront of increasing the awareness of the digital currency. Justin Sun was also in the news recently when he said the Tron (TRX) developer community is more active and vibrant than Ethereum. The Tron Foundation recently released a new tool suite for its developer community. 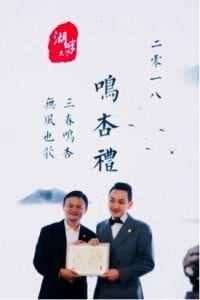 Recently, the CEO of the Tron (TRX), Justin Sun, announced a forthcoming partnership with an industry giant. The partnership is said to be valued at tens of billions of dollars. However, the firm involved in the partnership is unknown.

Justin Sun made this announcement via his Twitter account. In the tweet which he posted on the 12th of October, he said: “Finally, first time to partner with tens of billions of dollars valuation industry giant.” Sun did not disclose the name of the industry giant, and he asked his Twitter followers to guess the name.

His followers were quick to reply to his tweet. One of the users guessed Alibaba. Justin Sun recently graduated from Alibaba’s executive chairman Jack Ma’s Hupan University. He replied to this tweet and said Alibaba is worth over $500 billion, not tens of billions.

The predictions of other users include Clover, Baidu, Disney, and many more. Nevertheless, Sun has not confirmed any of these suggestions at the time of writing.

Back in September, Justin Sun enlightened the community about the integration of TRX into BitTorrent. BitTorrent is the world’s largest torrent client with over 100 million users. Justin Sun acquired this torrent client back in July this year for $140 million. According to the recent announcement by the firm, the integration of TRX into BitTorrent is dubbed “Project Atlas.” Project Atlas is aimed at creating a hybrid content sharing ecosystem that uses digital currency.

At the time of writing, Tron (TRX) is changing hands at $0.0235 after an increase of more than seven percent over the past twenty-four hours. The digital currency currently has a market cap of $1.54 billion with a trading volume of $171.56 million.