Recently, the founder and CEO of Tron (TRX) – Justin Sun announced a forthcoming partnership of Tron. Justin Sun did not disclose the name of the firm during his announcement on Twitter. He only said that Tron will soon be partnering with an industry giant that is valued at tens of billions of dollars.

However, there are unconfirmed reports that Tron (TRX) has partnered with Baidu. Baidu is the largest internet services provider in China. This was recently reported by Coinness – a digital currency market news service. At the moment, Tron (TRX) and Baidu have not released any official statement regarding the partnership.

Coinness Claims The Deal Will Be Officially Announced Next Week

Coinness said the Tron (TRX) team has confirmed the deal in a private communication with it. However, the blockchain project has not released any information about the partnership. Tron has not even disclosed the name of the firm they are about to partner with.

Justin Sun only talked about the forthcoming partnership and asked his Twitter followers to guess who the next partner of Tron is. The only clue Sun left was that the firm is an industry giant and it is valued at tens of billions of dollars. His followers guessed a lot of firms including, Baidu itself. However, Sun has not said anything yet. 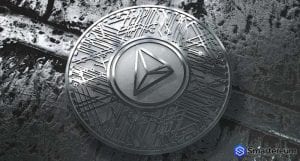 A Brief History Of Tron’s Background

Tron (TRX) is a decentralized internet firm that is aimed at transforming the internet. Tron wants to revolutionize the entertainment industry and create a decentralized web. The Tron Foundation was established in July 2017 in Singapore, whereas the open-source protocol of Tron was launched in Dec. 2017.

The Recent Trend Of Baidu

Back in August, Baidu announced its collaboration with Alibaba and Tencent in enforcing new anti-digital currency laws in line with the overall hardened stance of China on the crypto industry. Baidu has stopped the services of a minimum of two digital currency-related forums. The firm usually leaves a notice to the users of these services that states “the measures of Baidu are compliant with relevant policies, regulations, and laws.

Ripple News Today – How Ripple’s Xpring Plans To Make XRP Transactions Private and What This Means For XRP – April 1st, 2020