Blockchain technology is the future and the future is now. Every firm that wants to follow the trend of innovation is looking for possible use cases of the blockchain. A Canadian-based cryptocurrency and blockchain company called DMG Blockchain Solutions Inc., just announced that it would be developing a worldwide blockchain-based supply chain platform that will be used in the cannabis industry. This comes after the official legalization of recreational marijuana as reported by CBC, Canada’s national public news agency. 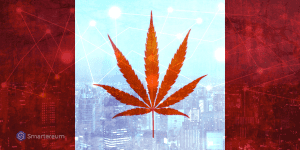 Recreational Cannabis And The Blockchain Industry

Currently there are more than one hundred and twenty licensed producers of cannabis throughout Canada. In fact, there might be scarcity issue soon if supply chain and labor shortage issues aren’t fixed. This is where the blockchain comes in. Using blockchain technology, DGM intends to change the supply chain in the marijuana industry for the better. They are currently in talks with major industry players, regulators and quality assurance labs. The blockchain-based supply chain will be launched do comply with all the industry specific requirements.

Statistics have shown that the cannabis industry is worth over $23 billion. Sellers to recreational customers get $6 billion in revenue from 13 million customers in Canada alone. Already, the blockchain technology is applicable in other supply chains like agriculture. In the beginning of the month, IBM debuted a food tracking network based on blockchain technology. The network is called Food Trust and it is meant to connect different food parties within the industry. In August 2017, a trial started and the company partnered with big corporations like Driscoll’s Inc, Nestle SA, McCormick, Dole Food Co, Unilever NV, Kroger Co, Golden State Foods, Tyson Foods Inc and McLane Co.