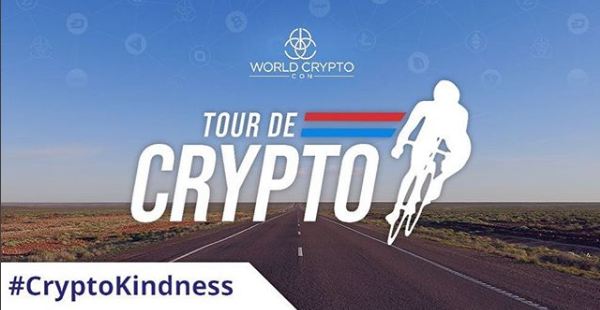 Jason Berlin and Jovel Velasquez, bikers on ‘Tour de Crypto’ got into an accident on yesterday and sustained serious injuries. The team was on a journey from New York to California to raise cryptocurrency for a charity focused on ending domestic and sexual violence.

Details about the accident are still sketchy at the moment. Jason received stitches in the face and also had a broken heel though he may not need surgery as earlier thought.

There are indications that the pair have had to deal with unfriendly weather at some points. In a recent interview with The Passion Economy, Jason admitted that he had no professional biking experience. “I had never even ridden a road bike before this, just a regular bike…the first day I couldn’t even clip my cycling shoes into the pedals…I fell all the time and everybody was laughing at me,” he recounted.

He explained, however, that they got about two months of training prior to the journey proper.

On a Mission to Raise Cryptocurrency Awareness

Tour de Crypto was created “to connect charities and their donors with cryptocurrencies.” The journey, which is its first annual cycling road trip, is raising 1 million dollars in cryptocurrency for HAWC, a charity that fights against domestic and sexual abuse. HAWC—short for Houston Area Women Centre—provide counseling, shelter, and support services for victims of abuse.

Tour de Crypto also enlightens charities, as well as businesses and individuals alike, about the benefit of adopting digital currencies.

What next for Tour de Crypto

At the time of writing, Jason is still admitted at the University Hospital, San Antonio while his partners were yet to hit the road. A tweet by Blake Rizzo, the charity advisor for Tour de Crypto, suggests that riders Jovel Velasquez and Dani Fuentes will complete the trip without Jason who may return to Houston when discharged to continue his recovery.

Members of the crypto community have rallied behind the team, showing support and encouragement while also calling on others to make donations towards their cause.

However, Standpoint Research Founder and crypto guru Ronnie Moas had some choice words for the crypto community at large for their lack of support for the cause:

Jason & Jovel put their lives on the line riding from NY to California trying to raise $ for https://t.co/xpjqbpWOGI | unfortunately, they almost paid w/ their lives last night & requests for donations to https://t.co/6p2fkrLgMe have fallen on deaf ears & were met w/ lame excuses pic.twitter.com/FFDqFo3hHQ

Charities are one area where cryptocurrency is yet to get a strong foothold. Jason and his team are part of a growing number of people leveraging cryptocurrency for philanthropic causes.

As Smartereum reported earlier this year, Binance cryptocurrency exchange and Verge raised funds from their communities to support victims of the flood that hit parts of Japan in July. Coinbase exchange launched its philanthropic arm, GiveCrypto.org to raise funds in cryptocurrency for worthy causes. It has a target of $10 million by this year-end and $1 billion in the next two years.

For more information, and to make a donation to the cause, visit http://hawc.org/tourdecrypto/.