It’s been a good week for XLM thanks to the positive sentiment surrounding Stellar. Over a seven day period, as reported by smarttest.wpmudev.host, Stellar (XLM) was able to gain by 15%. The market got a boost after reports said that Stellar was brokering a partnership with Fidelity, a multinational financial heavy weight. There was also the news that Coinsuper was listing XLM on its platform. Let’s not forget that Stellar also brokered a partnership with hyperion within the same time period. All this good news caused a boost in the price of Stellar that took it all the way to $0.47. At the time of writing, however, Stellar (XLM) was down at $0.24. This shows that it is down by 1.65% against the USD. 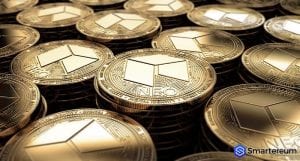 Main while, XRP made number two on the list of top gainers gaining in double digits within a month. This is no surprise as Ripple has been in the news for a while now. There was a significant boost in price when the chief marketing strategist of Ripple, Cory Johnson, said that the Trump’s administration is interested in Ripple’s technology. As if this wasn’t enough positive news, the Gates Foundation announced that it was interested working with Ripple Laps to provide payment services for unbanked people around the world. Two days ago, Cory Johnson suggested that the SEC will soon announce that XRP is not a security. All these contributed to the positive vibe around the coin within the last seven days. Yesterday, the bulls tried to push the price above $0.50. However, this morning, XRP is trading at $0.453113. This shows that it is now down by 1.95% against the USD and down by 0.42% against Bitcoin (BTC).

The price of NEO was up by 5% within the last seven days. This is most likely because of the celebration of NEO’s second anniversary. The NEO to USD pair subsequently started trading on a downslope at $13.60. Since August, there hasn’t been any signs of a significant bounce. It is imperative that NEO holds its current support levels as a break of these levels will lead to more declines below $6.75. If it should attempt to move upside, it will face resistance at $28.45. At the time of writing, NEO was trading at $16.62. This shows that it is down by 0.96% against the USD and down by 0.57% against Bitcoin.

In a bid to offer wallet owners more security, IOHK launched the Icarus project. This and many other positive sentiments around the cryptocurrency led to a boost by 5% within a seven day period. The ADA to USD pair is down from it’s all time high by 94%. However, it still made the list of biggest gainers within the last few days. ADA has been trading in range for more than a month between $0.060105 and $0.09425. Breaking out of this range is crucial if buyers are to return to the market. At the time of writing, ADA was trading at $0.075559. This shows that it is down by 2.05% against the USD and 1.65% down against Bitcoin.

At the beginning of last week, EOSBet got hacked again and hackers ran away with up to 65,000 units of EOS. This is the second time the EOS-based site isn’t being hacked within a 60 day period. This disrupted the EOS community and the entire ecosystem. Right now, EOS is trading at $5.41. This shows that it is down by 1.16% against the USD and down by 1.15% against Bitcoin.