Tether Ltd and Bitfinex have always had a close relationship as they share management. Just like Bitfinex has come under scrutiny from the industry, Tether Ltd has suffered the same fate. This isn’t the first time both companies are being accused of shady activities. However, the recent scrutiny was ignited when USDT lost its USD peg falling to $0.85. Until now, it hasn’t recovered against the USD.

Following these transactions, the market capitalization of Tether (USDT) fell to $2.1 billion. In fact, within last week, it fell lower to $2.0 billion. These activities have left the cryptocurrency community worried about Bitfinex and Tether. Bitfinex claims that it is sending Tether (USDT) out of its stores because it cannot hold more than a specific amount of USDT at a time. This explanation would have made sense if Tether Treasury didn’t send Bitfinex 50 million Tether less than a month ago. Critics and experts are beginning to suspect that Tether is leaving the stablecoin market and is trying to buy back it’s profits through Bitfinex.

This speculation was started by Su Zhu, the CEO of Arrows Capital. Since USDT holders claim it is almost impossible to redeem fiat currencies from Tether, Zhu argues that Tether is trying to turn the liability into an asset by buying it at a discounted price. Keep in mind that these tokens are yet to be destroyed as they ought to have been. In his words:

“Virtually anyone can arbitrage the USDT to make money it’s possible that Tether Ltd is trying buybacks.” 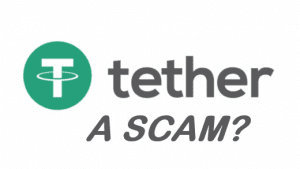 Zhu isn’t the only expert to talk about this theory. Many other analysts have agreed with him. Cas Piancey, during an interview with CoinDesk said that he would not be surprised if this is what Tether is doing. However, he doesn’t believe there is anything wrong with Tether buying its own coins. In his words: “I don’t think there is anything shady about Tether Ltd buying its own coins at discounted rates. It simply means Tether is only solvent through fraud”.

The fall in price of USDT comes at a time when investors are having doubts about Tether Ltd’s claims that its tokens are backed with dollar deposits. From the beginning, Tether has not been completed open about its banking relationships. The company has also avoided audits that have been called for by investors several times.