Ripple and XRP have been all over the news for the past few months. From one breakthrough to the other, Ripple has been cementing itself in the financial industry. During the SBI financial briefing, the CEO of the company, Yoshitaka Kitano said that they intend to use XRP to promote what he termed project R3. In his words:

“We are making plans to create project R3 which would require a more extensive use of the XRP token”.

SBI Group is among the largest financial institutions in Japan. The company functions in three core businesses in biotech, asset management and financial services. SBI has taken the lead in the development of XRP-based products in all of Asia ever since the creation of SBI Ripple.

SBI Group hosted a $107 million funding round in May 2017 for R3CEV. R3CEV is the largest blockchain consortium the world has ever known. It raised hundreds of millions in dollars that was used to develop blockchain networks for enterprises. Ever since then, the SBI Group worked on creating the R3 which would be used for a variety of blockchain based systems for large-scale conglomerates. Back in April, SBI Bank LLC, one of the major banks in Russia that is run by SBI Group, entered the R3 blockchain consortium in cooperation with hundreds of financial institutions. SBI announced:

“We see blockchains as core aspects of FinTech innovation and we are working on different measures inside and outside Japan. We believe we will be able to contribute to the development of blockchain on a global scale through this effort”.

SBI is yet to release the details of this XRP integration to the public. However, analysts believe that the bank may be working on something that will be used for cross-border transactions and would encourage other banks to use XRP.

Ripple Intends To Take Over The Financial World

Not too long ago, Brad Garlinghouse, the CEO of Ripple, during an interview with CNBC, talked about Ripple’s vision. He said that the company intends to entice major banks into using its blockchain network. In his words:

“The process has been incredible for us. We are signing up approximately one bank each week. Already, Kuwait’s largest bank has joined us. If we continue to gather momentum at this rate, the network will become global soon. The more banks join, the more valuable the network will be”.

This new project with SBI is going to help XRP reach its goal of being integrated in the traditional financial sector and eventually taking over. 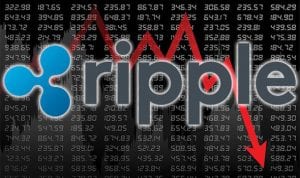 At the time of writing, XRP was trading at $0.455755. This shows that it is up by 1.14% against the USD and up by 1.14% against Bitcoin. The 24 hour trading volume is $368,523,815 and the market capitalization is $18,323,865,475. While the SBI project hasn’t caused any significant rise in price, things like this eventually have a Ripple effect on the ecosystem. It may not be obvious now because of the bearish storm in the market, but it will strengthen the ecosystem.