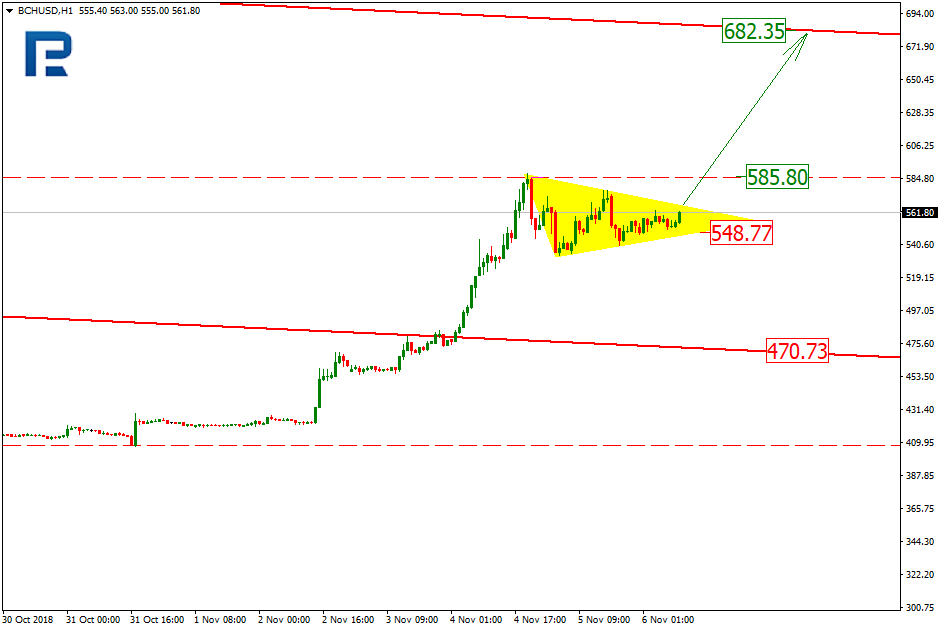 On H1, a strong movement allowed the price to break out the previous descending channel resistance, and may now move to the projection channel resistance at $682.35. During this reversal, the ascending trend may take a break near the previous fractal resistance, which would be like a midterm range. If the resistance at $585.80 gets broken out, the price may rise further. In the short term, there’s a triangle formed, which will determine the further move both in the short and mid term. If the upper boundary gets broken out, the price may reach $585.80, and then $682.35. Conversely, if the support at $548.77 is hit, the price may go down to the former resistance, which is now support, at $470.73.

By Nov 15, Bitcoin Cash will have been updated with OP_CHECKDATASIG. This scheduled hard fork will be implemented in order to improve the script language, which will enable the data coming from external saources. Besides, the BCH blockchain will start supporting atomic swaps.

There have been a good deal of debate around this hard fork. People said some developers and a large mining pools decided to use the previous software that does not support the update. V0.18.0 was meanwhile announced as early as in August, and the users already had a chance to see how it works. This version will start working in full after the fork is implemented.

Those who are all for the update say that new Bitcoin Cash features will make it more scalable, while they will also support smart contracts in a more effective way. Those who are against the hard fork assume no update is required, and, moreover, such an update is against the crypto’s philosophy.

In August, nChain announced its software version for Bitcoin Cash, with no contradictions whatsoever. It would be interesting to see how the users will react when all new features have been implemented.

In November, Blockchain Life takes place, one of the most important events for cryptos in Eastern Europe. Kraken, Huobi, bitcoin.com, and OKEx representatives are going to speak there, among others. Any speech here may change the market cap of some cryptos.

Any predictions contained herein are based on the authors’ particular opinion. This analysis shall not be treated as trading advice. RoboForex or Smartereum shall not be held liable for the results of the trades arising from relying upon trading recommendations and reviews contained herein.