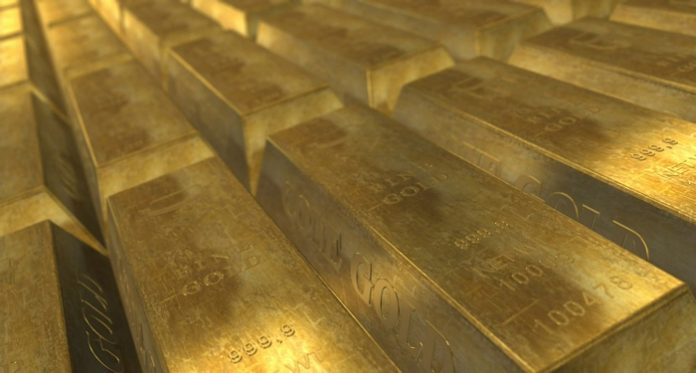 The Ripple platform entered the metals market officially earlier in the year. It launched a gateway known as eMetals which allows users to trade physical metals.

Traders on the platform can trade and invest in digital assets of silver (XAG), gold (XAU), platinum (XPT), rhodium (XRH) and palladium (XPD).

The blockchain of Ripple’s technology allows this transformation using crucial properties of speed, accessibility, security, trust and transparency. Ripple partnered with the BPG Group for eMetals. This company reports how the system works, saying

“combining the performance of the London clearing system, managed by London Precious Metal Clearing Limited, with the transparency of an exchange-traded asset.”

This company is well known for it’s refining operations of metal. However, it is also involved in recycling, management and trading.

Will Ripple overtake gold next year?

With the platform, many people are speculating on whether the cryptocurrency can overtake the gold market.

JC Collins, philosopher of metrics writer argues that XRP will lead cryptocurrencies next year in this regard. Collins explains that the rise of digital currencies has opened a new asset class that will also encompass stocks and bonds in the future. They will be traded through the blockchain and global liquidity.

The relationship between Ripple and gold

Gold is currently the most popular metal in the metal market. When it is invested, it diversifies risk when it comes to such financial holdings.

Gold is a popular safe haven for times when there are economic events which after investors negatively such an inflation. This is because it has a relatively low volatility. Also, gold’s value has stayed stagnant compared to so many other assets on the market.

Being a safe haven, gold is often compared to BTC, the highest valued digital currency today. However, analysts believe that Bitcoin will take the place of gold someday when its price stabilizes.

XRPhodor doesn’t agree with this assertion and says XRP has a better chance than Bitcoin. This is because of the rising liquidity of XRP. He also believes that the daily volume of Ripple is similar to that of BTC by May 2017. This was when the cryptocurrency averaged a billion dollars in one day.

This implies that the growth was almost the same percent as the peak of Bitcoin last year in December. Ripple is now large enough to move larger values through the network without resulting in volatility.

Considering the track record of the cryptocurrency, XRP accomplishes all it sets out to do. It has been able to achieve all this in a relatively short time. This may be attributed to the fact that Ripple is a private company and they don’t have to follow some rigorous processes.

Lots of analysts have praised Ripple for making all the right partnerships. CryptoMaps CEO, Craig Cole says Ripple may be the catalyst that makes cryptocurrencies mainstream. The company is helping financial bodies save costs due to its quick transaction speeds and ridiculously low fees.

Other cynical experts believe they BTC will never overtake gold. This is because it doesn’t have other uses aside from being a virtual currency. Gold, on the other hand, can be used commonly for medicine as well as jewelry.

Maybe Ripple will change their opinions including the latest development with BPG Group. More investors will benefit from using the eMetals platform to trade gold due to its transparency.