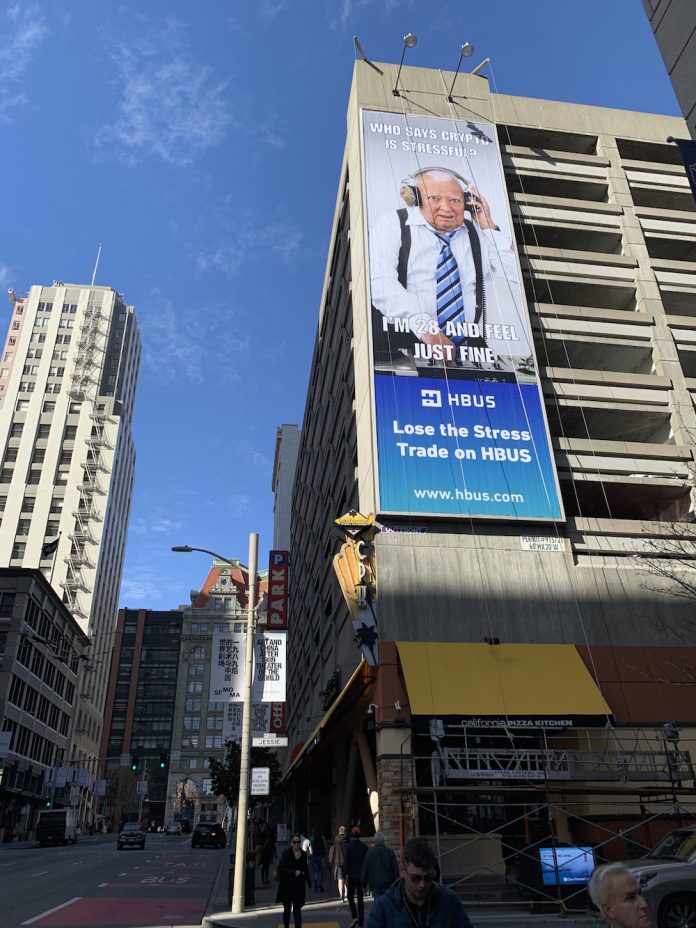 SAN FRANCISCO – December 18, 2018 — HBUS (www.hbus.com), the exclusive U.S. partner of Huobi (www.huobigroup.com), the world’s leading digital asset solutions provider, today announced the unveiling of their “Lose The Stress” billboard campaign. The billboard depicts an “older” man on turntables with the caption, “Who says crypto is stressful? I’m 28 and feel just fine”. The billboard is located on the busy San Francisco corridor of 3rd Street, between Mission Street and Market Street in downtown San Francisco. As part of the billboard campaign, HBUS has eliminated all trading fees throughout the end of the year.

“HBUS is committed to providing an easy-to-use experience for our customers when they trade on our digital asset marketplace,” said Frank Fu, CEO of HBUS. “With the holiday season, it’s important for people to focus on spending time with their families and having a stress-free holiday season.”

HBUS unveiled the first billboard campaign from a cryptocurrency exchange last month, depicting human evolution from ape to man, alongside the words “Wall Street” and “Coin base”. HBUS currently offers 12 digital currencies, including Bitcoin, Ethereum, and Litecoin, and 35 trading pairs, with plans to introduce three new tokens before the end of the year. Launched in July of this year, HBUS has recently made several hires from Silicon Valley tech companies and Venture Capital firms, including Google, Intuit, and Draper.

HBUS is an advanced digital currency trading platform and the exclusive U.S. partner of Huobi, one of the world’s largest digital currency marketplaces. HBUS offers a wider variety of token options and giveaways to American audiences, with 24/7 personal customer support and unparalleled security.

Located in San Francisco, HBUS is founded by a team of proven technology executives and disruptive founders. HBUS operates under the highest of ethical standards and is committed to full U.S. legal compliance. For more information, visit the HBUS website (www.hbus.com) or follow on Twitter (https://twitter.com/HBUSofficial).