Smartereum
Home Cryptocurrency Bitcoin Is Bitcoin “Digital Gold”? or “Sovereign Money”? or Neither?

Now we have three characterizations of Bitcoin – “digital gold”, “store of value” and “sovereign money”. Are these three interchangeable? Do they have the same meaning? Furthermore, could bitcoin truly encompass these characteristics?

To answer these questions, we should first understand the meaning of these characteristics.

The Role of Gold in the Economy
Gold is a worldwide commodity, such as oil or coffee. But unlike those commodities, it is not consumed. Almost all gold that was ever mined is still around. The industrial use of gold is very minimal, mainly jewelry or electronics.  So why the price fluctuation? In a sense, gold is a reflection of the state of the health of the economy, especially in developed countries such as the US, UK and Western Europe.  When a financial/economic crisis hits the economy, there is a “flight” to gold. Investors start moving their investments from stocks and bonds to gold. We have seen that during the financial crisis in 2008, the eurozone debt crisis in 2009-2011 and most recently when Great Britain voted to leave the European Union in June 2016. In each of these occasions, the gold price has surged. Particularly, during the ongoing Eurozone debt crisis, the gold price has almost doubled. Gold is a commodity used by speculators, such as George Soros, to bet on economic uncertainty and investors’ behavior. Hence, hedgers or speculators would use gold to bet on worsening economic conditions.  The chart below demonstrates the inverse relationship between the S&P 500 prices and Gold prices for the past year. 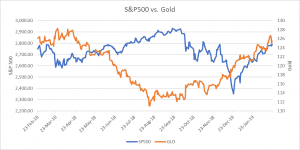 What is Sovereign Money?
The phrase “Sovereign Money” is now widely used to refer to a system where only the state, (i.e., government or central banks) can create or issue money, in contrast to the banking system in existence today where commercial banks issue most of the money in circulation.  In today’s banking system, demand deposits are backed up with central bank money, but only a very small fraction of 1.5% in the UK, 2.5% in the Eurozone and less than 8.5% in the US.  That’s the reason the system is called fractional reserve banking.  Sovereign system, on the other hand, has full reserve banking or 100% reserve banking.  In today’s fractional reserve system, the money in a bank account is not “real”, it’s not legal tender but rather a mere claim on money. Thus, in a banking crisis, the money in the bank account might disappear.

Most likely, when Mike Novogratz used the phrase “Sovereign Money”, he did not mean “money that is 100% issued by the government or central bank”. Because, that goes counter to the notion of bitcoin – a decentralized immutable system ungoverned by any entity. He probably was referring to the meaning of “sovereign” in the sense of “possessing supreme or ultimate power”. So, we ought to be careful when using the phrase “sovereign money”.

Are these three phrases or characteristics interchangeable?

From the above explanations of the three phrases, it seems that they are probably not. Gold does not necessarily function in the economy as a “store of value” nor it is falling under the definition of “sovereign money”. Therefore, using all three as if they mean the same, is quite misleading.

Could bitcoin fall into one of these characteristics?

Let’s examine each of these characteristics – “digital gold”, “store of value” and “sovereign money”.

“Digital Gold” – the idea is that bitcoin would function as gold functions today in the economy.

It’s a matter of accessibility and value.  If other altcoins are easy to access (i.e., trade, economic use) and their value is stable, then whether it’s bitcoin or some other altcoin would depend on transaction costs, speed, and security.

“Store of Value” – the idea is that bitcoin would serve as a store of value.

If bitcoin stops its mining and as long as people view it as valuable “art” or “memorabilia” then bitcoin might increase its value.

“Sovereign Money” – the idea is that bitcoin possesses “supreme or ultimate power”.

Superiority has nothing to do with being a “store of value” or “digital gold”. It could be superior regardless.

But, if bitcoin is superior to other cryptocurrencies or functions as “gold” rather than a currency, then maybe it should be removed from the cryptocurrencies’ basket all together. Very much like the reason we do not have “gold” or “fine art” in the S&P 500 index.

Regardless of whether bitcoin is “digital gold” or whether it possesses any supreme powers, it should be set aside, de-touched from any other cryptocurrency for the following reasons:

Therefore, bitcoin should be separated and removed from any cryptocurrency basket. It should stand on its own, whether as “memorabilia” or “art” or any other separate category. By removing bitcoin from the “rest of the pack”, we might observe more realistic valuation in the crypto market and less volatility. It’s time each altcoin and token stand on its own and reflect its own potential value.

[1] That excludes any physical asset that depreciates in value over time. Such as machinery, automobiles, electronics and in some cases real estate.  It should be noted that when it comes to real estate, it’s the land that appreciates (or maintain) its value, not the assets built on top of the land.

[2] Many crypto stablecoins, such as True USD, Circle, Gemini dollar and Paxos are pegged to the US dollar, for that exact reason – the US dollar maintains its value and serves as a store of value.

[3] Most developed economies have not experienced hyperinflation since world war II. Germany’s hyperinflation in the 1920s led by high unemployment was the main cause for the rise of Nazism in the early 1930s.