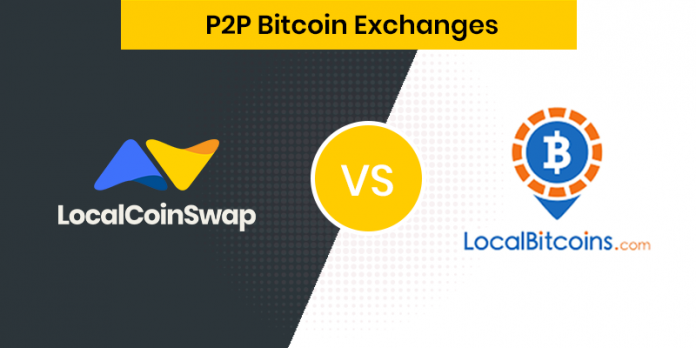 Both LocalCoinSwap and LocalBitcoins are peer-to-peer (P2P) Bitcoin exchanges, however whilst LocalBitcoins has been around longer than LocalCoinSwap, it’s interesting to see how the P2P landscape is changing with the introduction of newer, far more flexible P2P platforms that are providing more features and incentives to their users. A good example of this is LocalCoinSwap, the world’s first community-owned, P2P Bitcoin and Altcoin exchange.

It is free to register and add buy or sell advertisements on both platforms. The market maker, the person who placed the trade advertisement, pays a 1% fee when the advertisement is bought or sold.

Unlike LocalBitcoins, LocalCoinSwap gives 100% of the profit from the 1% fee back to the crypto community. If you own LCS Cryptoshares, the platforms unique token, you receive a passive income through dividends that are distributed to the LCS Cryptoshare holders every 3 months. LocalCoinSwap is the only P2P exchange worldwide to have such a profit-sharing structure and it is a real bonus for P2P traders as it means that you can own the platform that you trade on and ultimately make twice the profit.

LocalCoinSwap exceeds here with over 250+ payment methods to buy and sell Bitcoin compared to much fewer payment options on LocalBitcoins. A wide variety of payment methods to buy and sell Bitcoin is a unique benefit of P2P exchanges as they provide users with withdrawal and deposit methods that are not available on centralized cryptocurrency exchanges. Some of the payment methods include Cash in person, cash deposit, Direct Debit, Credit Card, National Bank Transfer, Amazon Gift Cards, iTunes Gift Cards, Uphold, Skrill, TransferWise, Paypal and Wechat to name a few.

In  February 2019 LocalBitcoins stated they will be making significant changes to their KYC processes. This move is due to looming regulatory changes affecting its operations in Finland. With quite a lot of outrage among the P2P trading community when the first wave of KYC implementation was first announced, more KYC may very well affect the user base of the platform quite negatively. Users who are privacy-conscious will likely consider LocalBitcoins a less appealing choice for trading. Increased verification requirements will also effectively lock out a lot of users in regions where identity documents are just not as easy to provide.

LocalCoinSwap, on the other hand, has optional KYC. This is a positive move as it gives traders the option of who they trade with rather than forcing traders to provide their personal information that can then be hacked or sold to third parties. KYC, in the opinions of many P2P traders, is an unnecessary intrusion into privacy that is often ineffective at deterring malicious parties and seems to be implemented mainly through forced regulation by governments. The reason many people choose to trade peer-to-peer is that these days centralized exchanges often request extensive personal information, which makes many people uncomfortable.

Both platforms have 2FA available for traders and actively encourage its use. LocalBitcoins also uses Login guard which is automatically enabled for new users.

The recent LocalBitcoins hacking of its forum and subsequent theft of user funds through a well-organized phishing scam was definitely a detriment to the platform, which has long been the main source of P2P trading around the world. It’s difficult to put your funds on a platform that has been hacked and therefore it’s easy to see why some P2P traders have been looking for other options.

In contrast, LocalCoinSwap keeps over 95% of its cryptocurrency exchange funds held in cold storage as a precautionary measure.

Both LocalBitcoins and LocalCoinSwap have a 24hour customer service team that is working around the clock to respond to user inquiries and a healthy FAQ to support their customer base.

We believe LocalCoinSwap will be the P2P platform to watch in 2019 simply because, unlike LocalBitcoins and other P2P Bitcoin exchanges, it still provides P2P traders with optional KYC, which is a big plus when it comes to people who don’t have access to centralized exchanges, lack identification documentation or simply want to trade privately.

Whilst LocalBitcoins deserves a lot of credit for fostering growth in the earlier days of Bitcoin when exchanges were far less plentiful than they are today, LocalCoinSwap, however, is a fresh new platform with a nimble development team and passionate community that has an impressive array of cryptocurrency combinations.

LocalCoinSwap also offers its users significantly more payment methods than LocalBitcoins and the fact that they give 100% of their profit back to the crypto community we think will be a determining factor in its success as it allows traders to not only profit from their P2P trades but also own a part of the exchange that they are trading on and thus profit twice.

Furthermore, LocalCoinSwap’s lucrative referral program gives traders a chance to earn up to 30% back on their trading fees, which is a huge incentive not offered by another P2P exchange.

Sign up and check it out for yourself at localcoinswap.com