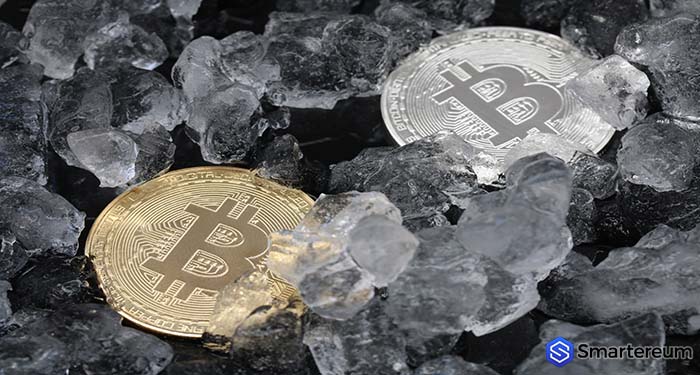 All investors are waiting for the end of the crypto winter.  There has been a lot of good news on the developmental and adoption front for Bitcoin and other cryptocurrencies recently. A few days ago, smarttest.wpmudev.host reported that Bitcoin miners saw a 7% rise in profits in February. The latest good news is that Bitcoin transaction volumes are currently in their highest high since the start of the cryptocurrency winter.

When the cryptocurrency winter started, the price of BTC fell started falling from its all-time high of almost $20,000. It found relative stability around $10,000 for a while but eventually feel as low as $8,000 and then $6,000. For more than two months, the volatility was low until the Bitcoin Cash Fork war that led to the separation of Bitcoin ABC and Bitcoin SV into two networks. So many investors have been discouraged since then as everyone is afraid of when the next bad news will spread.

“Some of the ‘hype’ that we mentioned was absent from the month of January appeared to resurface in February amidst pro-crypto statements from tech personalities (e.g., Elon Musk and Jack Dorsey) and crypto pundits ‘calling the bottom’ of Crypto Winter.”

It’s true that endorsement from celebrities, particularly traditional investors, helps support price movements. However, the hype can only last for so long. This is why it’s safe to say that the real support for Bitcoin’s price is coming from the transaction volumes and not the price.

The report also talked about how the transaction volumes for Bitcoin have increased significantly recently. In fact, they are in their highest levels in the past 13 months. This is a more concrete price foundation for price support than any celebrity hype that may have occurred recently. The report added:

“There were also more fundamental reasons to have a positive outlook on the market: transactions on the Bitcoin network were at the highest level since January 2018.”

When it comes to cryptocurrencies, usage is key to determining the price actions. The Bitcoin liquidity and inherent value are rising. However, it’s still too early to conclude that the winter is over. What it does mean is that investors have started accumulating and performing transactions as their faith in Bitcoin returns.

One reason why this interest is suddenly increasing is the anticipation of the approval of Bitcoin ETF. The report showed that the prospect of a Bitcoin ETF is interesting to investors and propels more buyers to participate in the market. This is because irrespective of the current price action, investors view the Bitcoin ETF as a step forward in the journey to achieving massive adoption. The Bitcoin ETF is expected to bring in institutional investors and liquidity. It stated:

“Even while some factions within the crypto sector question the significance and utility of a Bitcoin ETF, the market still seems to be fairly responsive to news about its potential: in the two days surrounding this news, the price of BTC climbed over 7%.”

Right now, the price of Bitcoin is struggling to cross and hold above the $4,000 level. It’s a long way down from $20,000 but it is a good time to accumulate BTC. It may seem like a big gamble but when a bull rally kicks off, you wouldn’t want to be left behind again this time.