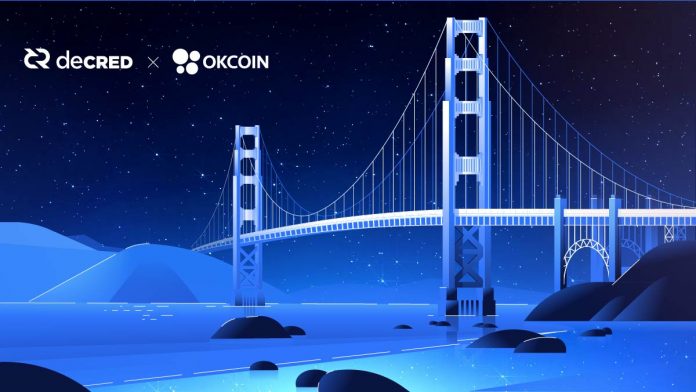 Cryptocurrency investors and traders in the United States can now purchase and trade Decred (DCR) easily as the token gets listed on OKCoin cryptocurrency exchange. The San Francisco-based crypto exchange announced on Wednesday, March 13 that it has added support for Decred (DRC) coin on its digital asset trading platform.

“…we’re thrilled to announce that DCR is now listed on OKCoin,” OK Coin wrote in a blog post to its community.

It explained that the OKCoin team engaged with ranking members of the Decred project and determined the investment worthiness of its token before the listing. The teams also deliberated on other considerations including the token’s ease of use.

In a press statement shared with Smartereum, the Decreed team explained that OKCoin customers can deposit and withdraw Decred (DCR), and trade the coin against the U.S dollar (DCR-USD) as well as other cryptocurrencies like Bitcoin (DCR-BTC and Ether (DCR-ETH).

“Our listing with OKCoin provides us with a significant fiat on-ramp, which offers greater access and ease-of-use to those looking to join the Decred community,” he noted.

“We’re building Decred to last for generations to come, which means giving coin holders a true stake in where the currency goes. The more participation in Decred, the closer we come to the ideal of a decentralized future ruled by the collective intelligence of a broad and robust community.”

In his response, the CEO of OKCoin Tim Byun said that the listing of aligns with the exchange’s mission of making more digital assets accessible to the world.

“We are particularly impressed with Decred’s community-driven focus, as miners and non-miners alike are empowered to provide input, as well as vote on feature enhancements and recommendations for new tools…Decred’s approach fosters community growth, creating a project that is built to last.”

Decred was launched in 2016 as a secure digital currency that will serve as a superior store of value. Its decentralized governance and consensus model allows all stakeholders make decisions on issues including rules and budget. With Wednesday’s announcement, DCR joins other major cryptocurrencies like Bitcoin, Bitcoin Cash, Ethereum, Ethereum Classic, Litecoin, XRP, Cardano, Stellar, Zcash, and TRX already listed on the exchange.

At the time of writing, Decred (DCR) is trading at $19.38 to the USD about 1.6 percent better than it traded the previous. The price of DCR has jumped about 13 percent since the beginning of the week before the news of OKCoin listing. Its total market cap has also grown to $183.5 million. Interestingly daily trading volume spiked to $14 million on the eve of the announcement from around $1.8 million in previous days. The volume has since corrected and is currently just over $4.3 million in the last 24 hours. Most of DCR trading in the last 24 hours happened on Binance—about 43%.