Tron Foundation has acquired blockchain app CoinPlay on Thursday, March 28, months after it acquired p2p network BitTorrent which has now launched its BitTorrent Live App. This news which will bring excitement to the Tron coin forum was announced by Justin Sun, the CEO of Tron yesterday on social media.

The Tron CEO wrote about the CoinPlay deal:

“I’m proud to officially announce that TRON has successfully acquired CoinPlay. From now on, CoinPlay becomes part of TRON ecosystem, together with BitTorrent, making TRON one of the largest decentralized ecosystems in the world, TRX”

In a post to the Tron coin forum and the broader cryptocurrency community, Tron Foundation stated that it has stepped up its game again by acquiring the “very first global blockchain app store” which is CoinPlay. It made reference to the BitTorrent purchase as a major forward stride by the organization.

Tron Foundation is responsible for development within the Tron ecosystem which in turn could make the TRX a hot coin.

What will Tron Do With CoinPlay Blockchain Market Store?

In the blog post to Tron coin forum, TRON Foundation observed that blockchain apps were not easily available at conventional app stores like the Google play store or Apple store. Coinplay, however, can provide an avenue to offer these apps and Tron is taking advantage of that.

“RON is dedicated to building the infrastructure for a truly decentralized Internet. CoinPlay positions itself as a blockchain application store that aims to offer the most comprehensive, suitable and updated blockchain apps.”

It said it is in line with its vision to provide a better user experience for blockchain users and hence promote the use of DApps and cryptocurrency. 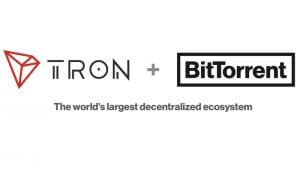 TRON is succeeding with BitTorrent Live

It was the same vision to grow the decentralized ecosystem, that led Tron and Justin Sun to acquire p2p file sharing network BitTorrent in 2018. “With BitTorrent, TRON has become the world’s largest decentralized Internet ecosystem,” it wrote adding that the CoinPlay acquisition has improved TRON, and promoting the development of the blockchain community.

As Smartereum reported this week, BitTorrent live, a video streaming feature on the BitTorrent network will release a beta version of its Social Media application this year to rival centralized options like Snapchat. This will use the BitTorrent Token (BTT) which was launched under the TRON trx mainnet. BitTorrent live could, in turn, make the BTT a hot coin as well as the TRX—music to the ears of the Tron coin forum.

Tron price (trx price) has increased by about 2 percent in the last 24 hours. 1 TRX to the USD is currently $0.0237. It does not look like a hot coin now as it is still outside the top 10 ranked coins. This is due to the impressive performance of Cardano (ADA) which is 6% up from yesterday and currently at 10th position.

However, the Tron coin forum will appreciate the developments in the project which will soon boost its price. Justin Sun also announced that Tron has recently upgraded its trx mainnet to the version 3.5 which will help the company continue to stamp its position as a blockchain-enabled entertainment ecosystem.

Apart from the trx mainnet upgrade, other recent development that excited the Tron coin forum is the integration of TRX to BitGo, the development of Tether USD on the Tron Network and the BitTorrent Token (BTT) Airdrop.