Smartereum
Home Cryptocurrency You Can Now Buy and Sell NEXO, Peer-To-Peer on LocalCoinSwap, With Over... 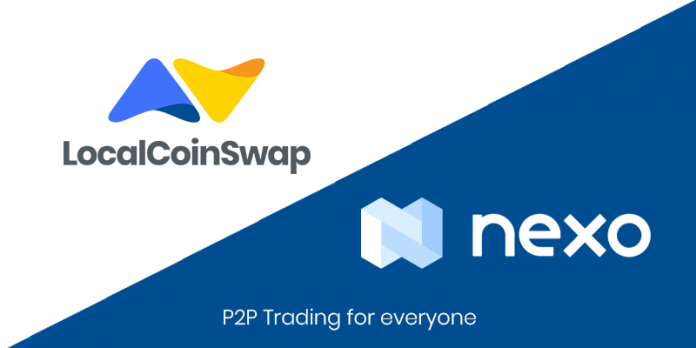 When it comes to buying and selling cryptocurrency, it’s often forgotten that many people around the world still don’t have access to centralized exchanges either due to local government regulations, local banking restrictions or are unable to access traditional banking infrastructure due to geography or lack of identification documentation.

By listing NEXO tokens on the LocalCoinSwap P2P exchange, LocalCoinSwap has continued to fundamentally change the nature of P2P finance and P2P cryptocurrency trading.

Not only does the NEXO listing increase accessibility to buy and sell popular top 100 CoinMarketCap cryptocurrencies outside of centralized exchanges, but the partnership also significantly opens up financial opportunities, such as cryptocurrency lending, for people who historically were unable to access traditional finance.

Another incentive for buying NEXO tokens peer-to-peer on LocalCoinSwap is that, similar to LocalCoinSwap’s unique platform token, LCS Cryptoshares, NEXO tokens also pay dividends to their token holders. Currently, 30% of the profits generated from Nexo loans go directly into a dividend pool that is then distributed to all NEXO token holders.

This new partnership between LOCALCOINSWAP and NEXO is a natural progression for two leading cryptocurrency fintech companies who are both well-known for developing highly effective financial solutions that help people find real-world solutions to real financial difficulties.

“We are thrilled with the possibilities that our partnership with Nexo brings to people located all around the world” said Daniel Worsley, COO of LocalCoinSwap. “This is the first time in history that a cryptocurrency lending token has been available to buy and sell peer-to-peer and our partnership with NEXO is significant as both teams have a solid focus on putting profit back into the hands of the people that matter, the cryptocurrency community. This is just another way of which we are able to change the face of traditional finance and make a significant, positive impact on the lives of everyday people.”

Nexo is the most advanced and trusted instant crypto lending provider on a global scale. It is the only blockchain company to provide its services in 45+ fiat currencies and more than 200 jurisdictions. Nexo allows digital asset holders the best of both worlds — instant access to cash and retaining ownership of their assets.

Its global operations are powered by the profound lending experience of Credissimo, a leading FinTech Group serving millions of people across Europe for over 10 years.

LocalCoinSwap is the world’s first community-owned, peer-to-peer (P2P) Bitcoin and Altcoin cryptocurrency exchange that connects people from all around the world to buy and sell cryptocurrencies such as Bitcoin and Ethereum. As there is no KYC or identification documentation required to get started, trading is fast, secure and private. All you need to do is create a free trade advertisement and in minutes you can be trading locally with others in your community, or with established businesses and OTC cryptocurrency brokers worldwide.

LocalCoinSwap currently has 23+ cryptocurrencies available for P2P trading, including Bitcoin, Ethereum, Monero, Dash, XRP, Dai, and Tether, to name a few; Over 250+ different payment methods including cash, bank transfer, direct debit, credit card, Paypal, Western Union, Amazon gift cards and iTunes gift cards, as well as more than 160+ fiat pairs, and is available in over 190+ countries, making it the largest selection of currencies available on any P2P exchange worldwide.

LocalCoinSwap also offers 24/7 customer service, no withdrawal or deposit limits and is the only P2P marketplace in the world with a profit-sharing model that gives 100% of its profits from the exchange back to the crypto community.