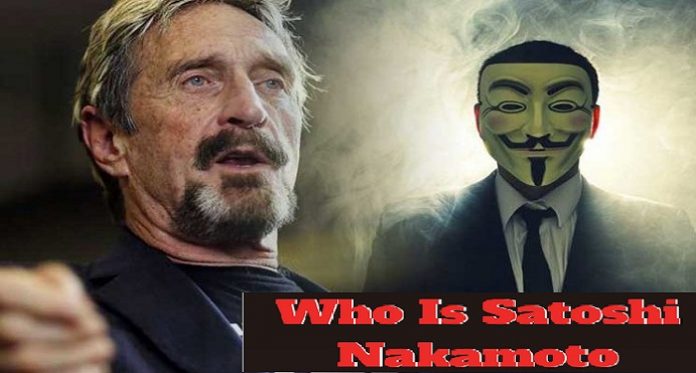 Internet security expert and cryptocurrency loudmouth, John McAfee says he knows the true identity of Satoshi Nakamoto, the creator of Bitcoin – the most popular virtual currency.

McAfee Knows Who Satoshi is

In a series of tweets published on Wednesday (April 17, 2019), McAfee alluded to the fact that he knew the identity of Satoshi Nakamoto. The crypto bull said he’d be releasing several clues and hints to narrow down Satoshi’s identity if the Bitcoin creator does not reveal himself first.

According to McAfee, conspiracy theories like the CIA invented Bitcoin is simply not true. Instead, the McAfee says a group of people did work on the network’s protocols. However, the controversial crypto advocate says one man – Satoshi Nakamoto wrote the now famous Bitcoin white paper and is now living in the United States.

There is no way for sure to know if McAfee’s claims are true. The popular investor and creator of the first ever commercial contemporary antivirus software is something of a colorful personality within the cryptocurrency industry.

In 2018, McAfee clashed with the U.S. Securities and Exchange Commission (SEC) over promoting initial coin offerings (ICOs). In April 2018, reports emerged that McAfee charged about $105,000 per tweet to promote cryptocurrency projects.

CSW is Not Satoshi

Any debate on the identity of Satoshi Nakamoto will always have the Craig S. Wright (CSW) factor as long as the Bitcoin creator remains unknown. McAfee weighed in on the topic saying CSW is not Nakamoto.

CSW – an Australian computer scientist has for many years claimed to be the Bitcoin creator. Stakeholders in the industry debunk his claim and Wright has so far been unwilling or unable to prove his claim.

In recent times CSW’s controversial claim has been at the center of an industry uproar. Wright and Calvin Ayre – proponents of Bitcoin SV (BSV) have threatened legal actions against those calling CSW a fraud for claiming to be Nakamoto.

In response, cryptocurrency exchanges like Binance and ShapeShift have delisted Bitcoin SV from their platforms. This move has seen the price of the altcoin slide even lower after a miserable performance so far in 2019.

McAfee also weighed in on the Bitcoin (BTC) and BSV debate. Proponents like Ayre and CSW claim that BSV is Satoshi’s true vision for Bitcoin. According to McAfee, the present Bitcoin network implements all the parameters put forth by Nakamoto in the Bitcoin white paper.