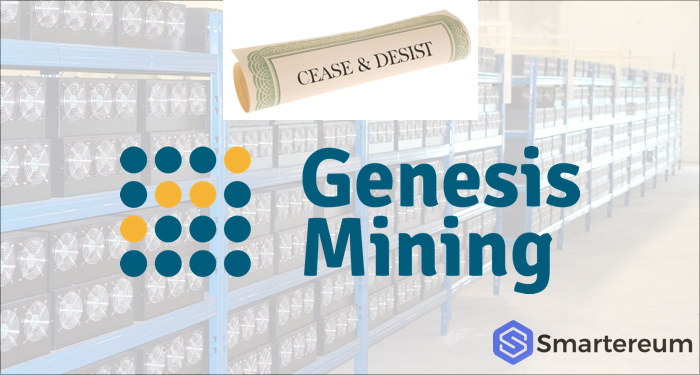 On Monday, March 9. a cease-and-desist order was released against Swiss Gold Global and Genesis. Both companies were named in the order which stated that the mining contracts purchased by the residents of South Carolina were securities.

The Security Commission of South Carolina claimed that the company, Swiss Gold Global, made a deal to act as a broker-dealer on behalf of Genesis without making the necessary registration to offer securities.

“At the time relevant to the order, Genesis Mining offered investment opportunities to the residents of South Carolina via mining contracts on its website. With Swiss Global standing as a broker-dealer for Genesis without any registration or exemption from registration, it can be held accountable.”

Buyers, through the contract, were allowed to purchase a certain amount of computing power over a period. However, the computing power was hosted on another platform. They were not allowed to own the mining hardware themselves. The commission considered the constitute investment contracts as securities according to the laws of South Carolina.

The order stopped both firms from doing such business in South Carolina. Also, they were permanently barred from coming to the state to offer securities in the future. However, they have an opportunity to call for a hearing with state officials. During the hearing, they will be able to present their side of the story.

This is the largest crypto investment related cease-and-desist order from a United States regulator in recent weeks.

To this date, officials of the state have sent similar orders to various firms. The most recent is the one that was sent to the crypto firm endorsed by Steven Seagal. Each firm has a right to request a hearing and present their side of the case for reconsideration.