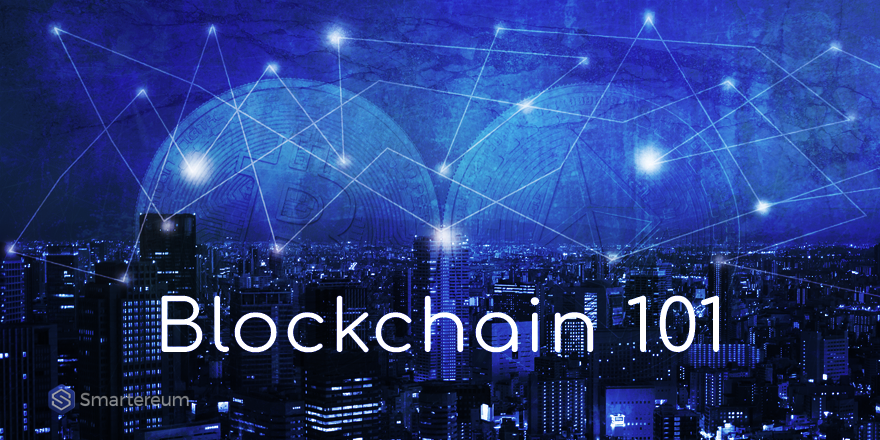 A blockchain is a public, distributed ledger of all transactions ever to take place on that blockchain. Although Bitcoin seems to be synonymous with blockchain, blockchain technology is not just Bitcoin. Bitcoin is the largest and most well-known implementation of the technology, but some of the other large open source implementations are Ethereum and Litecoin.

Very simply, the blockchain is software which runs on millions of computers. These computers (or nodes) communicate with each other to ensure that data stays in sync.

But how does it work, and why was it invented?

One of the primary responsibilities of a central, trusted authority in a financial transaction, such as a bank, is to prevent what is known as the “double spending” problem. Banks act as the trusted intermediaries to ensure that money is not spent digitally twice. The banks ensure that this exchange of money happens within a transaction.

A transaction, by definition, is atomic, i.e. either it happens or it does not, there is no in-between state. Transactions are also sequential. Which means a transaction always follows and/or precedes another transaction. Transactions do not occur simultaneously.

Without a trusted, central authority like a bank keeping records of each of these transactions, the financial system would quickly fall apart.

Therefore, although the idea of a decentralized ledger and digital currency has been around since the 1990s, the double spending problem was a huge stumbling block for its practical implementation.

How Bitcoin/Blockchain Solves It

In 2009, Satoshi Nakamoto, a yet-to-be-identified individual, published a white paper in which he claimed that he had solved the double spending problem without a central agency acting as an arbiter, via digital cryptography, game theory and computer science.

Nick Szabo had introduced Bitgold in 2005. Bitcoin is so similar to Bitgold and shares so many of its concepts that some people suspect Szabo to be Satoshi Nakamoto.

In order to understand how blockchain technology works, one needs to understand public-key cryptography. The full technical details of this topic is beyond the scope of this article. More details are available here.

At a very high level, public-key cryptography relies on two keys: a public key and a private key. These two keys are linked but separate as below:

As an example, suppose Bob wants to transmit a secret message to Alice. Bob will need to know Alice’s public key to encrypt the message before sending it to her. Since the public key is not a secret, Alice is free to send it to Bob. When Alice receives the encrypted message, she can decrypt it using her private key. Anyone in the middle who intercepts the message cannot decrypt it without Alice’s private key.

For reference, this is what a public key looks like:

Encryption ensures that messages between two parties is secure and reliable. However, the recipient also needs to verify that the message that they’ve received has not been tampered with. In order to do that, every transmitted message is digitally signed using its hash value.

A hash is like a digital signature of a message. Numerous algorithms, known as hash functions, have been developed to generate a hash, such as MD5 and SHA-1, but the one most commonly used now is called SHA-256. The details of hashing and the math involved in the various hash functions are unnecessary for the understanding of blockchain.

A hash function is a one way function. This means that the hash of a message is always the same when using the same function. However, the message cannot be decrypted from the hash.

As you can see, a single change to the data (upper case L in this case) completely changes the hash.

The data input to the hash function can be as simple as a single word, or it could be the entire dictionary and it will always produce a 256 bit hash value similar to the ones above.

Of course, transactions on a blockchain will not look like this, but this gives a general representation of it.

As previously mentioned, the blockchain is a network of nodes running the same software which communicate with each other to ensure data is in sync. Some of these are specialized nodes called miners.

The purpose of miners is to verify the transactions that are being done on the blockchain. When a number of transaction chains have been verified, they are combined to form a block of transactions.

As a reward for correctly and honestly verifying the transactions, the miners are awarded the cryptocurrency of the corresponding blockchain. So for example miners on the Bitcoin blockchain will be rewarded with Bitcoin. This amount is fixed but can vary from time to time.

It is highly infeasible to derive a nonce using a formula. The only way to find the nonce is through guesswork. This means that miners have to spend their own computing power to run through a potentially large number of 32-bit values before essentially stumbling upon the one which meets the requirements for the leading zeros. The fact that they found the nonce proves that they have done the work to find it.

Putting The Blockchain Together

Public-key cryptography ensures that transactions between two accounts are secure.

Hash functions ensure that transactions are valid, atomic and virtually impossible to modify.

Mining through proof of work ensures that transactions are confirmed and verified by a third party.

All these methods working together make the distributed ledger, and hence an application like digital currency, possible on the blockchain.