Smartereum
Home ICO AICHAIN Review: Bring the future of AI to everyone – A blockchain... 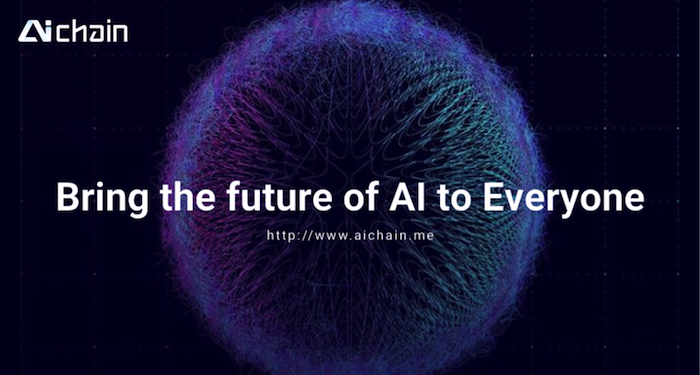 In 2017, the AICHAIN team started to combine artificial intelligence with blockchain, dedicated effort to seeing the breakthrough in blockchain industry.

Basic concept was first finished in June 2017, its main purpose is to provide a open-source independent public chain platform for data owner, application developer, operation platform and consumers. So, everyone can use AI with low cost and no technical barriers. The AICHAIN inherited the advantages of blockchain technology, such as decentralization, open source, tamper-proof and anonymous, to solve the current challenges of AI such as data domination.

AICHAIN has gathered over 100,000 supporters in more than 6 countries in only 3 months. More and more people pay attention to the progress of AICHAIN, which may change the existing situation in blockchain and artificial intelligence industry.

The vision for AICHAIN is to create a platform that can facilitate the communication, cooperation and data sharing among partic-ipants by enabling data transaction, protecting data security and disrupting data concentration, therefore improving the efficiency and productivity of the AI industry and allowing everybody, not just the tech giants, to gain the most out of the digitalization era.

Easy Live, the China’s leading video live broadcasting company, has signed strategic cooperation agreement with AICHIAN. Everyone can witness the transfer of AIT by more than 20,000,000 users on Easy Live. AIT is a decentralized blockchain digital asset that is issued through AICHAIN and is served as a medium of exchange on the AICHAIN platform.

Genius idea gather the talents, same with AICHAIN team. This team has famous scientist in artificial intelligence, ambitious entrepreneur from China’s largest blockchain computing enterprise, renowned scholars from UCLA and Tsinghua University, expert in marketing. AICHAIN has established base in China and America, both two team work together in research and marketing.With the Chinese State Council embracing blockchain in its 13th Five-Year Plan, Chinese policymakers are eager to set the framework and standards that accelerates industry adoption of blockchain technology. Now AICHAIN is dedicating effort to China’s technology creativity