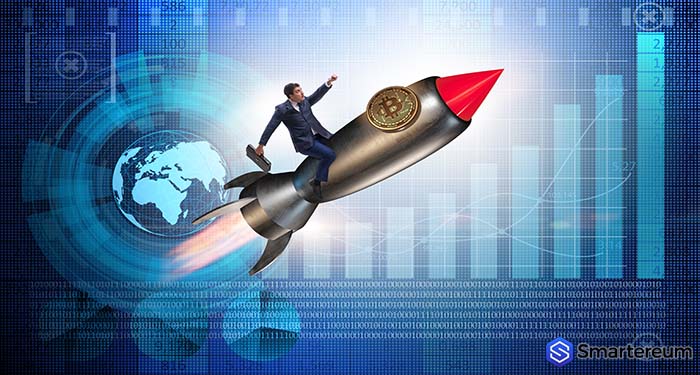 BTC News Now – Bitcoin price has continued its parabolic rise in the past few days much to the delight of optimistic observers and digital asset investors. The cryptocurrency leader is at the cusp of $13,000 which will be a remarkable milestone in a series of yearly highs during the latest bitcoin bull ride. As we will discuss in bitcoin news today, the new yearly high BTC price is not the only record bitcoin is setting as it aims for a new all-time high price which has become a recurring bitcoin price prediction for 2019.

BTC Price reached $12,867 within hours to set a new yearly high for the premier cryptocurrency this year. At the time of writing, however, Bitcoin price has settled around $12,572 to the U.S. dollar, which is a massive 11 percent rise in the last 24 hours. Interestingly, the daily trading volume for bitcoin has jumped to over $31.3 billion witnessed only a few times since the start of 2019. Bitcoin’s total market cap which crossed the $200 billion mark for the first time yesterday has jumped to $223 billion in a matter of hours.

According to data from CoinMartketCap, Bitcoin dominance is currently at 61.8 percent, its highest level in about two years. A high BTC dominance shows that the most prominent cryptocurrency has left other coins in the wake of its latest bull ride. Only NEO posted double-digit growth in the last 24 hours like BTC while most other top-20 cryptos recorded slight gains or loss as was the case with Litecoin (LTC).

Second-placed cryptocurrency Ethereum (ETH) is trading at $334 to the USD at the time of writing after making close to 7 percent gain on its price from yesterday. Interestingly, ETH has added 24 percent in the last 7 days bettered only by bitcoin (36 percent) and NEO (40 percent).

Ripple’s XRP The second most valuable altcoin by market cap is currently trading at $0.48 to the USD and up by 2 percent in 24 hours and 10 percent in the last seven days. The XRP price predictions are largely positive; some are predicting as high as $7 in the coming months. Though outrageous, this XRP price prediction comes from a notable XRP analyst and based on the famed “golden cross” forming on XRP price charts.

Bitcoin Cash (BCH) is trading just under $500 mark at the time of writing while TRON faces a battle to keep its top 10th position after losing about 1.5 percent yesterday as 11th-placed Cardano closes in. Litecoin (LTC) is also in red today trading around $135 to the USD. It is also down about 1.3 percent in the last seven days.

As Smartereum reported, Bitcoin is predicted to surpass its all-time high of around $20,000 before the end of the year. The recent price trajectory indicates that this bitcoin price prediction is not out of place. Furthermore, notable BTC investors and analysts suggest the coin will go as high as $100,000 in only a few years citing factors like the new FOMO, unprecedented institutional involvement, better blockchain fundamentals, and the bitcoin halving expected by 2020.