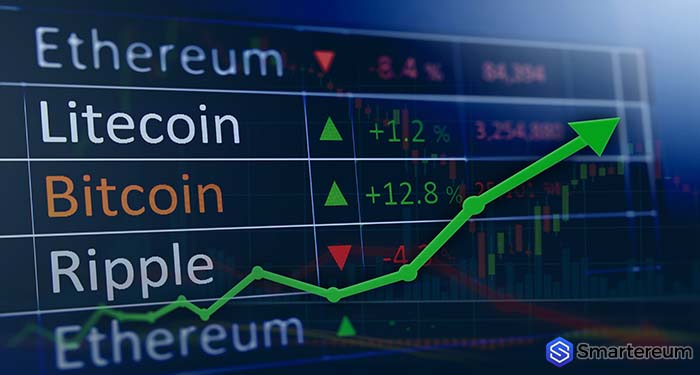 Bitcoin (BTC) Price is headed for $12,000 after a period of uncertainty last month which saw BTC struggle below the psychological barrier of $10,000 for swathes of time. However, the positive bitcoin price news comes with even more interesting fundamental indicators; first, Bitcoin’s hashrate reaches an all-time high and then BTC dominance reaches its highest point in 2019. Bitcoin News today features the importance of these milestones for bitcoin and the broader cryptocurrency community.

In a recent news report, Cryptocurrency News outlet Coindesk revealed that the amount of computing power dedicated to mining bitcoin (BTC) has reached unprecedented level citing data from BTC.com, one of the most notable bitcoin mining pool. According to the data on Bitcoin Difficulty Page of the BTC mining service operator, the average bitcoin mining hash rate rose to 71.43 quintillion hashes per second (EH/s) in the last 2 weeks. The stats, which was updated on August 5 at block height 586,672 showed that the BTC hashrate went up about 10.8 percent from a former peak of just under 65 EH/s in July to set the new record.

According to Bitcoin Wiki, bitcoin mining difficulty shows how hard is it to find a hash that will be lower than target defined by the system – basically determines how hard it is to compete for bitcoin mining rewards. This BTC mining difficulty is usually adjusted automatically after 2,016 blocks (about every 14 days) to keep maintain the block time around 10 minutes. This difficulty increases when there is more processing power directed towards bitcoin mining. From a Coindesk estimate, the increase in bitcoin mining difficulty represents and addition of more than 100,000 top-of-line ASIC miners in only two weeks. In monetary terms, this increased mining hardware requires an investment of about $200 million and could be a result of favorable mining season brought by cheaper hydroelectric power.

As Smartereum reported, bitcoin miners Bitmain planned to invest as much $80 million in additional mining hardware in China to take advantage of the cheap electricity during the peak of the rainy season. And although a Chinese Power Company had in the past threatened to exclude bitcoin mining from activities from its cheap hydropower electricity, the Southwestern provinces in the country accounts for about half the entire global bitcoin mining activity, according to recent research.

Bitcoin Price, at the time of writing, is $11,848 to the USD as a BTC price of $12,000 remains clearly in view. BTC price did reach peaks above the $12,000 mark yesterday and the day before but those it has not sustained above the mark after several attempts in the last 48 hours. Trading activities around the cryptocurrency has swelled also; BTC boasts over $22 million in the last three days, up from about $16 million at the stat of the week. If Bitcoin overcomes the $12,000 barrier, the next target will be its yearly high of $13,700 it reached in June. For now, bitcoin (BTC) will make do with a 18 percent increase in the last 7 days to overturn the last bearish phase.

A notable prediction among some bitcoin experts is that BTC price will have to be independent of altcoins and the cryptocurrency market in general for the next bitcoin Bull Run to arrive. This seems to be happening as BTC has left other major cryptocurrencies in the wake of its recent price gains.

Data from CoinMarketCap.com, BTC.com, and Coindesk.com were used in this report.