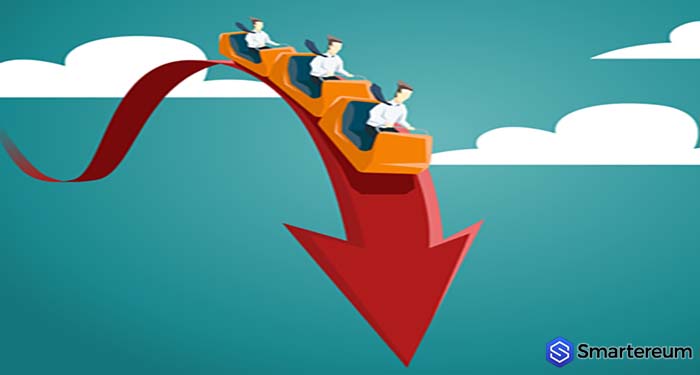 The bears are having a field day in the ethereum markets. This follows the recent drop in ETH price and an overall sullen sentiment over the cryptocurrency recently. Ethereum news today highlights some disturbing ethereum price predictions 2019 backed by fundamental and technical indices.

The price of ethereum (ETH) has dropped considerably in the last 36 hours and appears to continue in the same direction. At the time of writing, the ETH price is about $188 to the USD. The price is down about 4.5 percent in the last 24 hours having closed trading yesterday at $196. The second-biggest cryptocurrency by market cap reached a low of $187 in the last 24 hours before its current price. The trading volume for ETH reached over $7 billion in the last 24 hours for the first time since Friday.

The outlook for the cryptocurrency is far from positive. Analysis from experts is not bright and the ethereum network faces challenges in terms of technology.

Ethereum may be in for a major price downturn if the prediction of cryptocurrency investor Chris Burniske materializes. Burniske, who is a partner in venture capital firm Placeholder and respected blockchain personality, warned that Ethereum’s native token ETH is facing a difficult period akin to bitcoin crash of 2014/15.

“To objective observers, the network’s momentum was clear despite the bearish price action; those predisposed to dislike based on perceived vested interests were blinded by biases & missed the bus. What happened to $BTC then is happening to $ETH now.”

Though Buterin believes this is a problem facing the entire blockchain and cryptocurrency sphere, Binance CEO Changpeng Zhao thinks otherwise.

In response to Buterin’s remark, CZ suggested that newer blockchains have solved this scalability problem which was rife about a year ago. “I like Vitalik & ETH, but speed & capacity was a problem a year ago, but now a largely solved problem for newer blockchains (for now),” CZ wrote adding that “We need to increase real applications that people actually use, so that we hit the new capacity issues/limits again. Focus on applications.”

As Smartereum reported, TRON which is one of the so-called “ethereum killers” recently released a new scalability solution that involves a sidechain, Sun Network. Just like TRON, a lot of the newer blockchains have adopted less centralized blockchain governance systems to increase the speed of confirming transactions.

Standing on the ethos of true decentralization, the ethereum developers are working on several technologies to boost the throughput and capacity of the network. Vitalik has also called for other measures like increased gas fees to help decongest the network. He recently picked holes in some of the scaling solutions adopted by other networks, particularly bitcoin’s Lightning Network.

If it counts as good news, developers recently agreed on the EIPs to be included in the next Ethereum network upgrade. EIP—short for Ethereum Improvement Proposals—are proposed modifications to ethereum core code. As Smartereum reported, 6 EIPs were agreed upon for the Istanbul upgrade which will tentatively launch in October. ProgProw, a controversial proposal that seeks to block specialized mining ASIC hardware from the network is expected to be launched in the first quarter of next year as part of Istanbul 2.