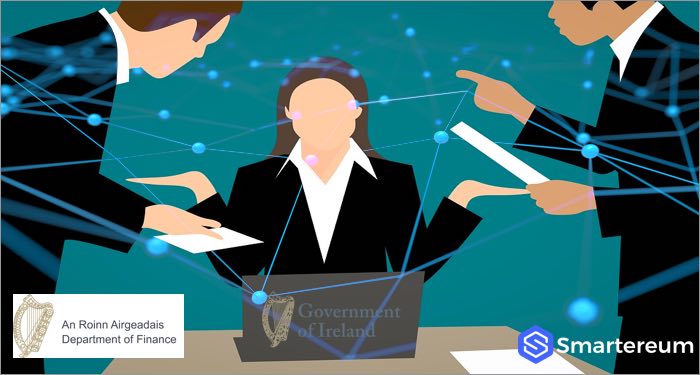 Amidst the call for increased regulations and more stringent control of the cryptocurrency and blockchain industry, Ireland has taken a bold move to establish a “working group” with the aim of coordinating approach on blockchain while also monitoring its development on the technology.

To that effect, Ireland’s Department of Finance published a discussion paper titled: Virtual Currencies and Blockchain Technology. The 31-page long paper focused on critical questions concerning the industry such as global funding of virtual currency business, international policy response on blockchain, potential benefits of cryptocurrency and also criminality involved in the industry.

Calls for Government Regulations for Blockchain and Cryptocurrency

Regarding the Global policy response to cryptocurrency, the paper explained that “the international approach to virtual currencies [by governments, tributary agencies, and central banks] reflect each country’s review of their legislative and regulatory framework and its own view on how virtual currencies behave.”

Presently, international blockchain stakeholders are contemplating regulating the cryptocurrency industry to checkmate financial crimes like money laundering, security fraud, and tax evasion. The report also stressed the benefits of cryptocurrency to national economic development. The paper explained that “One of the primary benefits of virtual currencies is their ability to transform the way payments and transactions take place”.

Prospects and fluctuation of Cryptocurrency

Furthermore, according to the report the combined market value of the more than 1,500 virtual currencies in issue was estimated to be worth circa €300 billion while also claiming that investors in bitcoin for can expect average daily price movements against the US Dollar of more than 7%. By comparison, the price of gold against the US dollar fluctuates on average about 0.6% per day.

If the content of this paper is implemented, it would mean that Ireland could be on its way to becoming the second nation after Japan to regulate cryptocurrency business within its borders after. Similarly, as of March 2018, Philip Hammond the U.K Chancellor of the Exchequer announced that the United Kingdom Government is about to set-up a “Crypto Assets Task Force” to oversee and monitor blockchain and cryptocurrency market.

In the concluding chapters, the paper made series of recommendations concerning the blockchain industry such as: Keeping up to date knowledge of developments in the technology to identify risks and assess potential economic opportunities for Ireland, Engaging with industry and subject matter experts in the private and professional sectors to build a dynamic communication flow and finally, Liaising with other areas of Government to assess where involvement might be required.