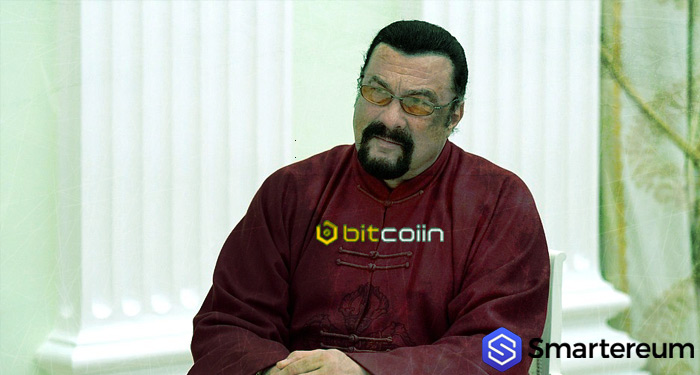 Hollywood action star Steven Seagal has left Bitcoiin according to the latter’s press release. The Hong Kong-based cryptocurrency company has confirmed letting go of its Brand Ambassador now that their initial coin offering (ICO) has concluded. This means that the company has raised enough cash to go through the conversion phase towards becoming a cryptocurrency trading system.

The conversion phase that Bitcoiin referred to is how it turns “from token to mineable coin” in the hope that Bitcoiin will eventually join the ranks of other higher valued cryptocurrencies like Bitcoin. It sees the funding raised from the recently ended ICO to be utilized in turning its tokens onto a useful open source-based currency acceptable in its own coin trading software.

With the ICO formally ended, Bitcoiin is set to function presumably “within its ecosystem”. The company chose to use the term “ecosystem” as opposed to blockchain technology stating that it is slated to be a “genuinely anonymous cryptocurrency”. As a decentralized token, no single individual or entity is seen to take sole control of the platform, hinting at a possible evolution towards joining the ranks of the best crypto trading platforms available today.

Bitcoiin was quick to address concerns on whether there would be any referral program in store now that it has let go of its Brand Ambassador. Without mentioning any media outlets in particular, they reiterated their option to hand out any incentives occurred only at the duration of their ICO period. So any investors that referred like-minded individuals can only avail of said incentives if investments placed happened in the middle of the ICO itself of the coin trading software.

Anybody with clarifications about incentives and conversion are then directed to Bitcoiin’s white paper to nip any doubts and speculations in the bud. The press release did not mince any words in criticizing the media out to sensationalize and piggyback on the negative press surrounding any trading platform for cryptocurrency getting discussed online today. The company emphasized that with the ICO done and over with and with the blockchain technology yet to go live, there will be no staking or referrals to be expected in the Bitcoiin ecosystem.